KATIE: THE CRIMES OF GRINDELWALD

Reader Katie reviews awesome film FANTASTIC BEASTS: THE CRIMES OF GRINDELWALD and now we're all itching to see it! 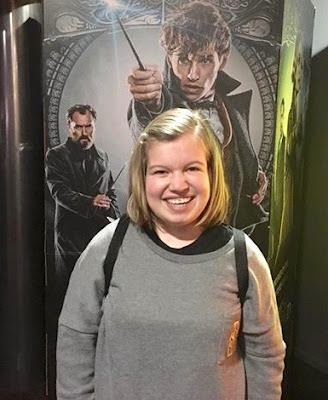 Katie says:
Firstly, here’s a PRO TIP for you! DO NOT whisper during the Warner Bros. logo!!! I heard you, people in back of me, who were whispering as if one of the most iconic moments of the film hadn’t already happened! The Warner Bros. logo was beautiful, I think. I was blinking away the tears while these people were whispering. If you were disturbed by me making inhuman noises for the whole film, you shouldn’t have disturbed the opening moment!

Right, I admit I did break a few cinema rules when I watched Fantastic Beasts: The Crimes of Grindelwald, but IT ALL FELT SO REAL. The Wizarding World logo, which I had only seen on, maybe, like a little screen before, was RIGHT THERE. We were in the WIZARDING WORLD. Boy, is there a lot inside that world! This film is was super zoomy but super fun but also terrifying and breathtaking and exhilarating. It was the cinematic experience I knew it would be and I had been waiting two years for. It also helps if you’re a big Harry Potter and Fantastic Beasts fan. Muggles may get confused, but Potterheads know it’s all magical! In order to #protectthesecrets, I’m going to mention a few of my favourite parts and a little bit about each. 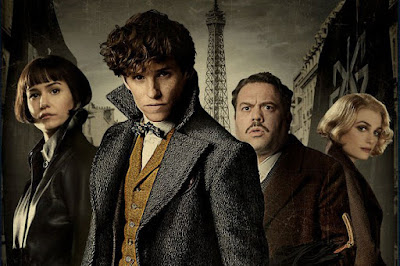 Hogwarts: Uhh the FIRST TIME I have seen MY SCHOOL on the BIG SCREEN. I missed all the Harry Potter cinema releases, so Fantastic Beasts is a big deal. Also there is a surprising cameo from cough mumble mumble. Also JOSHUA SHEA adds more “awwww” to Newt’s character, which already has a lot of “phwoar,” which leads me to my next favourite part....

Bunty! Every author/magizoologist needs a willing assistant, and Bunty is willing to do A LOT for Newt, even giving him helpful suggestions like cough. Man, I’ve really got to get this tickle in my throat sorted! I’m a regular Call The Midwife watcher, and I loved seeing Victoria Yeats in this role, all the Newt fangirls like me would have applied for Bunty’s job. The job does have some perks, like cradling an arm full of....

BABY NIFFLERS! A cameo suited to their size makes the whole cinema burst with cuteness! I’m so glad I already have three! My Newt collection is also growing, which is good because he, as always, was also one of my favourites!

Newt: One of the BEST lines in the film of course goes to our Hufflepuff hero! He is every bit as gorgeous as in the first film, but sometimes he’s sad and angry too, and I think it’s important that we go deeper into  these characters for the second film. Speaking of character depth.... 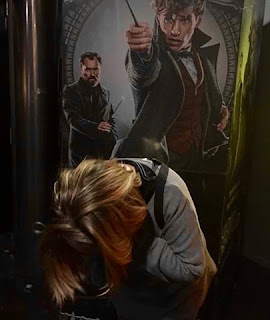 Queenie! She was amazing in the first film, but Alison Sudol was a stand-out actor in this one!

Credence! I am beginning to think that Ezra Miller is not of this Earth, not just because of his amazing FASHION SENSE! I grew to love Credence more after first watching Fantastic Beasts and Where To Find Them. I didn’t think we’d see much of Credence, just him looking dark and mysterious. Well, there was that, but also more!

Side note: There are a LOT of cat-like creatures in this film, so the inclusion of biiiig kitties made Crimes of Grindelwald even more enjoyable!

That’s all for now, but I have more over on my Instagram, @katiethequibblerreporter. Come geek out with me, and GO WATCH THIS FILM!

Cathy says:
Sounds amazing, Katie, can't wait to see it!! Have YOU seen it? What did YOU think? COMMENT BELOW to have your say...
at November 18, 2018