How two girls at the turn of the last century took some amateur photographs that shook the experts... and made the UK believe in fairies. Was it real? Read on to find out more… 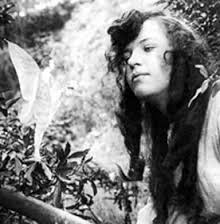 In 1917, down in the leafy Cottingley Glen near Shipley, West Yorkshire, sixteen year old Elsie and her cousin Frances, nine, claimed to have first seen fairies. Unsurprisingly, nobody believed the girls and in a bid to prove that the fairies were real, they begged Elsie's father to borrow his camera to take pictures so the family could see for themselves.

It was Elsie's father himself who developed the photographs - he was obviously astonished when the picture showed Frances, surrounded by a ring of dancing fairies! Once over the shock, helooked for a rational explanation and put the illusion down to cardboard cutouts that the girls had drawn.

It wasn't until 1919 that the photographs came to a wider audience. An expert commented on the photograph of Frances: "This plate is a single exposure. These dancing figures are not made of paper nor any fabric; they are not painted on a photographic background - but what gets me most is that all these figures have moved during the exposure." 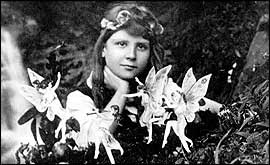 Every little girl claims to have seen a fairy - but these girls had proof! The photographs were shown to the famous writer, Sir Arthur Conan Doyle. Doyle was a member of the spiritualist movement and happened to be writing an article on fairy lore; he was fascinated by the pictures and wanted to include them in his feature. This is what brought them to the public eye. His article received much criticism but it also sparked a debate that would never really be solved until 1981, when Elsie and Frances, now old ladies,  admitted that the photographs had been faked. In spite of this, they still staunchly claimed to have seen fairies by the beck and argued that the fakes had been made to make people believe.
Why they took so long to admit the images were faked - or indeed the possibility that they were lying in that interview - are questions which are still being asked today. We will leave it to you to decide  - are fairies real?

Cathy says:
I've always loved the story of the girls who saw fairies in Cottingley... and my kids, in turn, loved the film version of the story, Fairytale, when they were growing up. At the time, the photographs convinced the UK... do YOU think there was anything to their story? COMMENT BELOW to have your say!
at August 10, 2019