AUDITIONING FOR THE VOICE

Reader Fay tells us all about her recent experience of auditioning for The Voice... wow! Read on to see what happened! 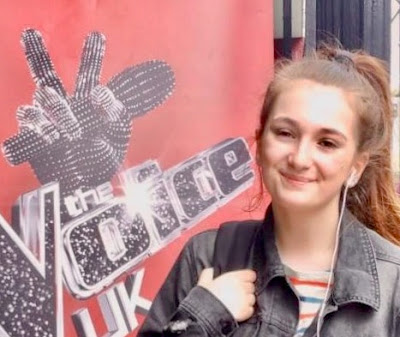 FAY SAYS:
A few months ago, I spontaneously applied for The Voice UK after thinking,  I’ll be old enough next year why not? I put my name forward, sent a video clip in and applied. I completely forgot about it until a month or so later, when I got an email confirming that I’d managed to get an audition for the show in Manchester. By this point I was in the middle of GCSE exams and wasn’t sure whether to go ahead. I ended up calling one of my friends and explaining to them, and they basically told me do it or I'd regret it! I asked my mum if she would take me to Manchester  and she said she’d love to - which was good because as I’m under eighteen I had to have an adult with me. The audition date was two days after I finished my exams meaning I didn’t have much time to prepare, but I decided to go anyway just for the experience.

On the day we got up really early to get to Manchester for 11am. By the time we got to the audition I was really nervous, as it was hosted in a big, fancy hotel. We had to show our forms and our ID and were given name stickers and ID numbers before being directed to a waiting room. Every so often groups of ten people were called out for the first part of the audition. After fifteen minutes my name was called so my mum and I went to a smaller waiting room with my group of ten. I was nervous again because everyone else was over eighteen and I'd only just turned sixteen but I was determined do it anyway.

My mum waited outside while I went in. Once inside, there were chairs sat in a circle and a small table at the front of the room. The two people sat at the table were a vocal coach and a producer, both of whom were really lovely. We went around the circle including the two people at the table and said our names and an interesting fact about ourselves. Mine was that I was once in a pantomime with Basil Brush! After that we stood up to sing our pieces one at a time. 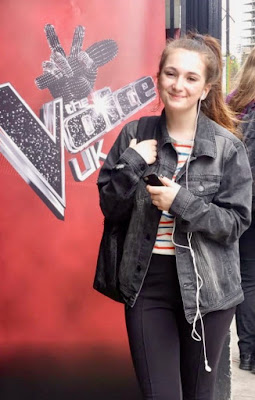 Because of the order of the list, I ended up being last out of my group to sing. Everyone was really good and I think all of them should have got through to the next stage. When it was my go, I stood up in the centre of the circle and said the name of the song - ‘Space Oddity’ by David Bowie. After I finished everyone clapped and then we all left for about five minutes while the producer and vocal coach talked. When we came back in we were told that only one person from our group had got through to the next stage, so we were told the name of who had got through and told that we should all come back next year If we didn’t get through this time.

I didn’t get through to the next part of the audition but I didn’t mind because for me it was a really good experience and proved I could hold my own with adult singers. Everyone in my group was really lovely and they had all wished me good luck before we went in and complimented me on my singing afterwards. All in all, the audition was a really good experience and I’m so glad I got the chance to go to it as it was so fun and wasn’t anywhere near as scary as I’d thought it’d be.

Cathy says:
Wow... what an experience! I hope Fay gives it another shot in the future, as her enthusiasm, talent and determination are sure to help her succeed! Have YOU ever had to audition for something? COMMENT BELOW to tell us more!
at August 18, 2018