CARA: THE NIGHT BEFORE CHRISTMAS

Reader Cara explains various traditions around Christmas-time and how they came to be... read on!

Cara says:
On Christmas Eve, all across the country and beyond, excited children are hanging their stockings at the end of the bed, or sometimes, like the sisters in the CHOCOLATE BOX GIRLS, on the mantlepiece around the fire. Where did this custom come from? How did it start? Like many of our Christmas traditions, folklore mixes in with Christianity to form a Christmas Eve custom. 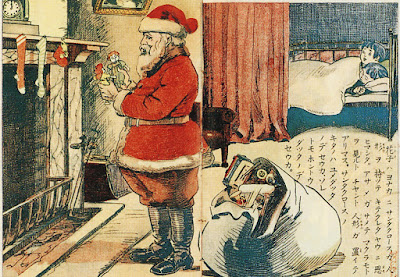 One old story tells of a poor man unable to buy clothes or food for his three daughters. In some versions, the problem is a lack of ‘dowry’ without which the girls would never be allowed to get married. A kind neighbour decided to help, and to avoid making the poor man embarrassed, he threw three gold coins down the chimney, which then fell by accident into three stockings drying by the fire! The neighbour later became known as St Nicholas.

A different legend, from Holland, describes a character called Sinterklaas travelling around on his white horse. He would stop to let his horse feed on carrots or hay which children would leave out on the doorstep in their clogs. In return, he would leave presents and sweets. But it was not until 1823 that the poet Clement Clarke Moore wrote the verse ‘A Visit From St Nicholas’ which included the lines: ‘The stockings were hung by the chimney with care in the hope that St Nicholas soon would be there.’

The tradition became a firm part of Christmas - all long before the arrival of the Coca Cola lorry - and families still hang stockings or sacks for Father Christmas to fill, almost 200 years later!

Cathy says:
Love this - thank you, Cara! What are YOUR Christmas Eve traditions? COMMENT BELOW to tell all!
at December 22, 2018