DO YOU BELIEVE IN GHOSTS?

I asked readers if they believe in ghosts... this is what they said. Spook-tastic! 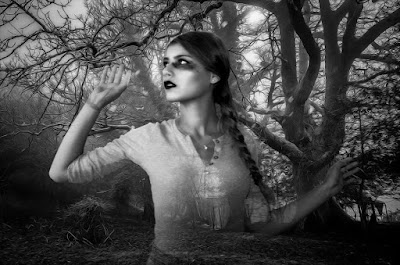 Trish says:
I've seen several. The most vivid was actually in a public toilet... I was checking my hair in the mirror and there was a young girl behind me. She was holding her arms out and her wrists were cut. A local friend told me the girl had been out with friends, had a fight with one of them and cut her wrists with broken glass. Her friends didn't reach her in time and she died in the stall. They no longer put locks on them for that reason. For some reason I wasn't scared, just so very sad for her...

Leanne says:
When my grandfather passed away, all the clocks in the house stopped at the exact time he'd passed away. I also smell my nan's perfume sometimes, and the smell of cigarettes as she used to smoke. At work, I've had hassle with the alarms going on and off randomly when I'm the only person there, and I've seen figures there that couldn't possibly have been there.

Rowan says:
When my daughter was seven, she pointed to the staircase and said, 'Why is that man there?' There was nobody there at all, but my daughter went on to describe a man in a long grey coat...

Mary-Ellen says:
I haven't seen ghosts exactly, but I was staying in Canada and I went out for a walk in the woods. I was thinking about a problem that had been worrying me for a couple of years, and suddenly I came to a clearing in the woods and a very powerful calming feeling swept over me. I can't describe it - I've never felt anything like it, before or since. The next morning, the property owner told me the place I was walking had been an old native American burial ground. Soon after I got back from Canada, the problem I'd been worrying about was resolved - this was life-changing and I'll be forever grateful.

Sara says:
I grew up in a house full of witch-marks and mystery... of course I believe in ghosts!

Lucy says:
This is my cousin's story... when she was fourteen, she was trick or treating with friends and met a girl called Charlotte who had got separated from her friends and joined up with their group. They all thought her costume was a bit extreme, an old-fashioned white nightdress that was actually wet and a really convincing facepaint bruise on her temple. They kept trying to give her a jacket or a jumper because they thought she'd get pneumonia, but she wouldn't accept anything. They asked if she wanted to come back to my cousin's house where they were having a sleepover, but she said no and ran off. It was my auntie who told the girls that a teenager called Charlotte Browning had drowned in the river in the 1930s... and that sometimes, on Halloween, her ghost could be seen. I think I'd have been petrified if that had happened to me!

Cathy says:
Oooh... some seriously spooky stories here, especially the first one and the last one! Do YOU believe in ghosts? COMMENT BELOW to have your say!
at October 31, 2017