CURL UP WITH A CLASSIC: CHITTY CHITTY BANG BANG 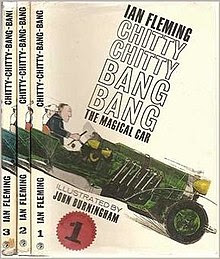 CHITTY CHITTY BANG BANG is a children's classic book published in 1964 by the author Ian Fleming, better known for his James Bond series for adults. It was written for his son Caspar, who was twelve, but sadly Fleming suffered a heart attack and died two months before the book was released. It was his only children's book. It really captures the magic of flying and adventure. An inventor has a  regular car and a regular life... but on several occasions the car appears to have a mind of its own! The inventor and his family have endless adventures, catch criminals and have several run-ins with gangsters. The book is a thrilling fantasy set in the 1900s, and a film was made of the story in 1968 which made it even more popular! 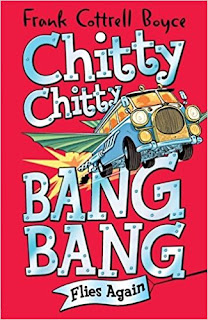 Recently I discovered a sequel to this amazing classic which is just as awesome as the original! CHITTY CHITTY BANG BANG FLIES AGAIN by Frank Cottrell-Boyce is set in modern England, with a regular family struggling with money.  The creative and eccentric dad is an inventor and s tries to renovate a vintage VW camper van. The family decide to go on holiday and while traveling, the family discover that their VW seems to have her own mind. The children,  like in the original,  get kidnapped while on holiday and the parents save them. Although it's a bit different to the classic, I recommend it highly as it has aspects of modern 20th century life that are very relatable and easy for younger readers to understand. Both are amazing books and I really recommend them! If you do like the modern sequel, try also CHITTY CHITTY BANG BANG OVER THE MOON and CHITTY CHITTY BANG BANG IN THE RACE AGAINST TIME!

Cathy says:
Definitely have to agree with Lauren on this one - a classic - and Frank Cottrell-Boyce is fab too! Have YOU read these books? How did YOU find them? COMMENT BELOW...
at June 04, 2018