Women must try to do things as men have tried. When they fail, their failure must be but a challenge to others. 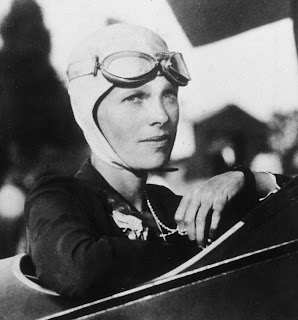 Amelia Earhart gave women their wings. No seriously. She is famous due to her fascinating and mysterious life in which she pioneered her way, head and shoulders above the men in her field, breaking many records and championing the advancement of women in aviation. That is, flying.

She was always a bit of a boundary-pusher… born in 1897 in Atchison, Kansas, she often played basketball and later held a keen interest in mechanics. She even attended college, which at the time was uncommon for many women.

It wasn’t until after the war in December of 1920 that she took her first aeroplane ride with famed war pilot, Frank Hawks. It was love at first flight (forgive me) and she started lessons straight away. Soon she bought her very first plane, which she called The Canary after it’s yellowy colour. 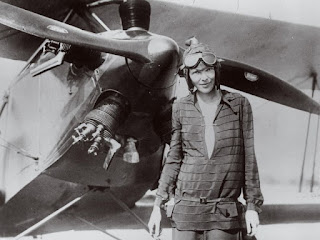 There was no stopping her! Amelia went on to become the the first female aviator to fly solo across the Atlantic Ocean and she set the world altitude record of 18,415 feet. Earhart also helped found the Ninety-Nines, an organisation of female pilots who banded together to encourage women in aviation, which still exists to this day!

In 1937, Amelia mysteriously disappeared during an attempt to circumnavigate the globe. She vanished over the central Pacific Ocean and was never found. Although there have been countless investigations, nothing absolute can be drawn with such little evidence.

She inspires me with her seamless, courageous spirit and even though I hold no interest in aviation as a career, this energy can be applied to my own hopes and dreams. She gives me confidence that I can achieve anything. Amelia once described fears as paper tigers, adding, please know that I am aware of the hazards. I want to do it because I want to do it. So let her disappearance be an inspiration for us. You could view it as she intended, not necessarily a failure but more of a challenge.

CATHY SAYS:
An inspiring woman indeed... and a role model for anyone wishing to push the boundaries and reach for the sky! Do YOU have a fab female hero or role model? COMMENT BELOW to have your say!
at June 03, 2018