Reader Blue travelled up to the Glasgow Pride Festival this summer - here, she tells us what her day was like! 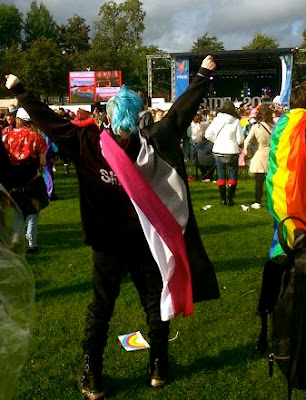 Blue says:
I'd travelled quite a way but didn't get to take part in the parade itself - all I can tell you is that there were lots of rainbow flags, a police car decorated with rainbow balloons and a Tesco float that somehow produced rainbow smoke! I did get to Glasgow Green where there were lots of stalls and fairground rides and a stall selling things like flags and badges and flower crowns. I managed to find some vegetable tempura and there was even a dog show - I saw a Staffie dressed as Sonic the Hedgehog and various small dogs dressed in rainbow tutus and bandanas.  My friend swears she saw a rainbow dyed Dalmation, too! 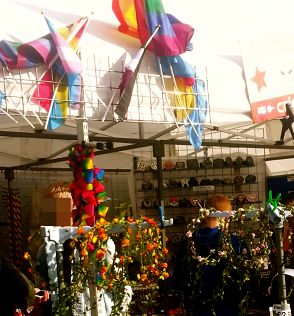 As for the people, so many were dressed up in various fantastical styles! Many of us were wearing our respective Pride flags as capes, and lots wore plastic rain ponchos because the weather was flipping between blue skies and sun one minute and downpour the next. That just gave the host a chance to make jokes about the sun 'coming out' though!
The main stage was where the magic really happened - I watched a group of drag queens dancing, and one of them, dressed as an alien and dancing to Katy perry's 'Extraterrestrial' joined the crowd to pose for photos with fans afterwards. A band called Collabro played a great set too, including 'The Circle of Life' from The Lion King! DJs played music in between the bands and the 'Macarena' got the whole crowd dancing in sync - I absolutely loved the carefree atmosphere. 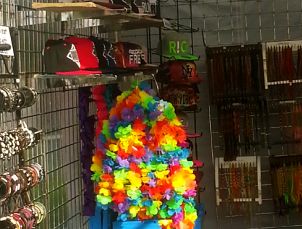 Pride is just such an accepting place and a great celebration, not just for LGBT+ people but for everyone! People were dressed whatever way they wanted to, whether that was Lolita, punk, drag, their own eclectic style or just men putting glitter in their beards! Nobody laughed at anyone else because we were all comfortable being who we were, without judgement. In fact, total strangers were complimenting each other on their look, which was lovely! I'll definitely be going back next year, and I'll try not to miss the parade next time!

Cathy says:
I watched the Liverpool Pride Parade this year and loved it too... such a happy, positive and peaceful way of showing the world that love is what matters, no matter whether someone is straight, gay or otherwise. Would YOU take part in a local LGBT pride festival? Do you think we still have work to do before the LGBT community feel fully accepted? COMMENT BELOW to have your say!