IT'S A TWIN THING

Reader Isobel shares what it is like to be a twin in this fab twin questionnaire! 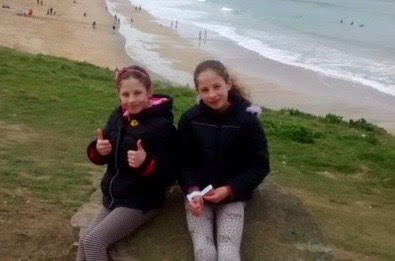 1. What is it like being an identical twin?
Being an identical twin is mostly amazing - you always have someone by your side and it gives you a best friend for life. You never need to worry about being the only one to go somewhere as you’ll know you’ve always got your twin with you.

2. Are there any downsides to being a twin?
Overall, having a twin is cool but there are a few things that can get on your nerves. For example, when people get you mixed up! This happens a LOT. I know they sometimes can’t help it but especially if they’ve known us for ages, it can become really irritating! Another reason is when people can only invite a certain amount of people to do something and because they don’t want to pick one twin and not the other (which is actually quite a nice thought) they unfortunately can’t pick you as the other twin might get offended.

3. Are you similar in personality?
To be honest, we are actually quite similar. Not only because we look alike but we also share the same interests! The only difference is how I’m much quieter than Lucy as she’s always so loud and crazy compared to me.

4. Have you ever dressed alike or played pranks pretending to be the other twin?
Sadly, we haven’t played any pranks... yet! It would be a great idea for the future - Lucy could pretend to be me during an exam (although we are both about as brainy as each other) so I could pass! When we were small though, we did sometimes wear cute matching outfits - we were so adorable! 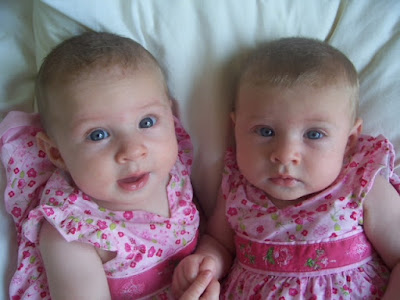 5. Some twins have an almost telepathic understanding of each other- is this the case for you?
Actually - no, unfortunately we don’t, but we can sometimes think the same things- it’s quite creepy! Also, recently we have been starting  to have the same viewpoint on everything and once we had the exact same marks on a test with the exact same questions wrong - how weird is that!

6. Have you ever shared the same friends?
Lucy and I haven’t ever had different friends. Well, except for that one time where Lucy met this person in a soft play (which I didn’t go to) and haven’t seen each other since - I don’t think that counts though!

As you can see, me and Lucy are very alike - can you guess who is who?

CATHY SAYS:
So fascinating, thanks Isobel for sharing!! Have YOU got any cool twin stories? COMMENT BELOW to have your say!
at July 20, 2018