I first met reader Ameera at a library event in Devon, so I was thrilled to find out that a piece of writing about libraries had earned her a place in the final of the Young Journalist of the Year competition! Read what she had to say. So cool... 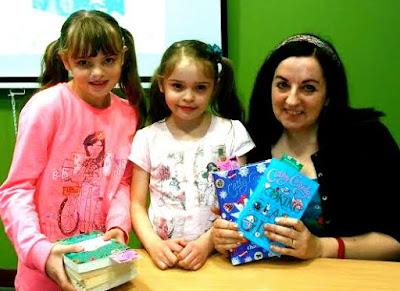 Ameera says...
All across the country, libraries are facing reduced funding and the possibility of closure. I spoke to Seaton Library in Devon to find out what this means for individual libraries.

As recently as 2011, all the libraries in Devon were run by Devon County Council. Facing cuts in 2015/16 of £50m to the council's budget, it was feared that half the libraries in Devon would have to close. The council had already saved £3m from its library budget and needed to save £1.5m more by last April. These cuts were achieved, and not a single library in Devon has closed so far.

So what happened? Devon Libraries separated from the council's administration and became part of a new charitable trust.This means that the libraries are managing themselves, and allows the trust to keep all the libraries open. However, Devon County Council are giving less money each year to the new management. To keep costs down, many top managers were made redundant and the offices they used were rented to provide income.

The libraries now have a lower budget to buy books and DVDs with, so less popular books will no longer be available to readers. Library staff are very worried that today's great authors (maybe the 21st century's next Shakespeare) will not be getting read. These libraries can no longer afford to run events as often and reduced staff means more limited opening times.

FoSeL (Friends of Seaton Library) stepped in where funding was not enough. They raise money for events and prizes, donate books and volunteer to help keep the library open. Even so, this is not enough - other local libraries are still threatened with closure. If this is the case for YOUR library, please go and help save the books today.

Cathy says:
Wow... this is a great piece of reportage from a very talented library lover! Readers may be interested to know that the characters in my new book LOVE FROM LEXIE (out June 15th!) save their local library from closure... in a very cool way! Do YOU use your local library? COMMENT BELOW to tell me more!
at May 31, 2017