Reader Chloe writes about the sadness of losing a much-loved pet... and finding the courage to move on. 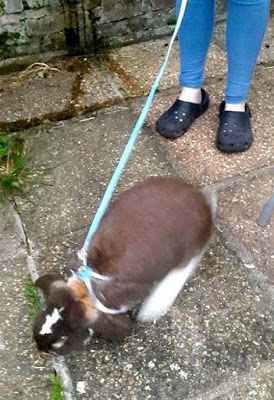 Chloe says:
Oreo was the best pet I could ever have wished for. I got him from a rescue on April Fool's Day 2016, and he was a lovely and very crazy rabbit! Oreo liked to play in the house and was very cuddly. We went for walks together in the garden and boy did I get plenty of exercise... he ran all over the place and I must admit sometimes he was very naughty! Oreo sadly passed away in October - he had a heart attack, we think caused by fear because a fox was in the garden. Even though he was safe in his hutch, he must have been very frightened. I really missed Oreo but I knew he had had a good life with our family, and I felt that eventually I would want to move on and find another animal to look after and love. 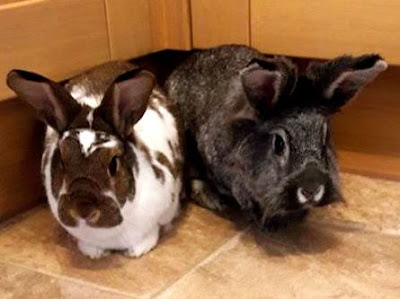 That happened round about Easter this year. They came from a pet shop, but they'd been there for almost a year, so I thought they deserved a proper home at last. We had looked at other pairs of rabbits but these two were definitely the favourites, so we named them Eeyore and Bambi - Eeyore is the grey female, and Bambi is the brown male. We took these little cuties home with us on the bus, in a special pet carrier. Their cage in the garden was already set up and waiting, so as soon as we got home we put them in and let them get settled. After a while, we brought them into the kitchen for more exploring, so they could be nosy and have a look around. Now, in May, they have settled brilliantly and are the most amazing and loveable pets. I think they're enjoying themselves, too! 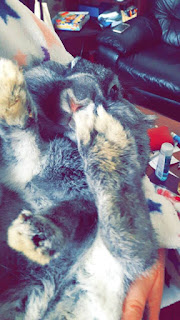 Rabbits like to live in pairs, but it is best if they are neutered or you could end up with a lot MORE rabbits than you bargained for! Most rescues offer neutered rabbits only, and Eeyore and Bambi were neutered already so we didn't have to worry about that. Rabbits mostly need love and affection, but not all rabbits are as cuddly as you imagine. When it comes to food, rabbits need a balanced diet of hard pellets and fresh veggies. My rabbits love apples and they get treat bars once in a while too! Not all pets have a long life, but with affection we can make sure they have a happy one!

Cathy says:
I have two rescue rabbits and agree that they are happiest in pairs. Ours live in a moveable hutch most of the year, moved daily so they can have fresh grass; in the winter, they live in the greenhouse! Do YOU have a special pet you love to bits, or have YOU lost a beloved animal friend? COMMENT BELOW to have your say!
at May 22, 2017