Reader Julia shares a fantastic piece of writing which left us wanting more! Read on and see what you think! 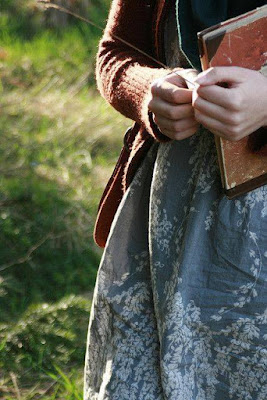 I was tired - beyond tired, if I was honest. Laremy, Arthur and I had been up all night, going through documents; surviving on nothing but a bottomless pot of black coffee and a bowl of liquorice all-sorts between us. Laremy was hopeful, always saying that we were only a few steps from uncovering the man in the photograph, but I didn’t feel the same. It was nothing but endless files, and all of these men had been to training programs, all of them had blond hair and blue eyes and medal after medal of honorary services. All of them were also dead.

It was like running through a hall of mirrors. Face after handsome face, staring back at me with their plastic smiles. Would we ever find him, or was this as much of a lost cause as I was beginning to think? We'd come to Hamburg, intent on finding a nameless man from an old photograph, but not once did any of us step out of the stuffy, filed-crammed offices and take a walk through the gardens, the forests, the meadows. I needed the fresh air, somewhere I could go and be myself again. I sat down on a thick, dried-up tree stump, partially shaded by a nearby birch, slipped off my shoes and allowed my bare feet to slip between the damp blades of grass. I wish we had come here for a vacation instead; I liked my job, but coming to this place for an investigation just seemed like an ugly reason for being here. Why had the picture led us to Germany? Who was the person in it, giving the government so much grief? It was a mystery.

‘I thought I'd find you here.’ It was Arthur, his tie loosened, jacket abandoned, his hair a ruffled mess. Even the most dedicated researchers had to relax every once and a while. ‘Nice place, isn't it? Much more relaxed than West Berlin. Laremy thinks we're close to a break-through, and once he gets like that, there's no standing in his way.’

‘I want to solve this riddle too, but at what cost?’ I said. ‘The man in the photograph might not even be Haphner at all; if he isn't, and we've wasted our time, we'll be back to square one...’

‘You remember why we're doing this in the first place, don't you?’ Arthur said. ‘It matters. Our government want to find Haphner, and that’s what we’ll do. Detectives never give up! We have one clue, at least, and even if it doesn't lead to anything, we still have a job to do. Who knows, maybe some day in the future, we could come back here again for a short holiday? Picnic's by the seaside, hikes through the forest...’

‘Five more minutes, then we'll get back to work...’

I loved it out here. And if I could forget the sort of people who once trod upon this soil, counting their harsh goose-steps as they trampled the grass, I could very much imagine myself living here. In some cottage, painting by day and sleeping by night. But I was still young, still curious of mind, and at times, beyond my twenty-one years. While that was so, I would always want to solve mysteries and bring about justice. And whether he liked it or not, we would find Erick Haphner. It was just a matter of when, where and how...

Cathy says:
I love this... I really want to know what happens next! Thanks for sharing, Julia! Did YOU enjoy? COMMENT BELOW and have your say!
at April 29, 2018