We asked you to share your spooky experiences to get us in the mood for Halloween! Read on... if you dare! 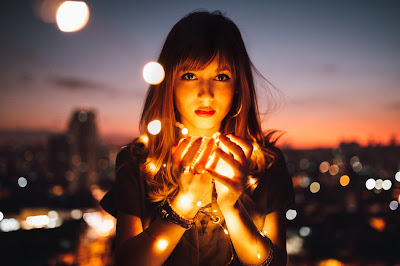 My nan owned a shop that three sisters used to own -  two of the sisters died and haunted the shop. They would move things around and play tricks. When the third sister died, the haunting stopped -  my nan said they were just entertaining themselves until they were reunited with their sister. Also, when my great-granddad was in the war he and a few of his buddies were stuck in no man's land when a higher ranking officer found them and lead them to safety. The officer disappeared so the men asked  where they could find him - they were told that the officer had died three days earlier!

Michelle says:
We have ghosts living with us. Some of them are family, but most of them died centuries ago and are still here. We once had twenty living with us! Since then we've had a clearing performed twice. Family still visit and we sometimes get other ghosts moving in, so we just accept that they live with us and they're not as scary as people believe - most of the time they stay in rooms that aren't occupied and don't bother us.

Trish says:
I was out with a friend and popped to the loo, and as I was checking my hair in the mirror, I saw a young girl behind me in white peasant blouse with long, wavy red hair. She was holding her arms out and crying, saying she was sorry, she didn't mean it. When I turned around, she wasn't there. My friend later told me there was a girl who killed herself in the toilet stall after a fight with her best friend. They couldn't get the door open in time to save her so now there are no locks on the toilet stalls.

Kellie-Anne says:
I can hear and see ghosts at night. I once was in bed fast asleep, I heard my cup banging on my desk near my bed. No one was there...

Claire says:
I visited a so-called ‘haunted’ medieval hunting lodge near where I live, because I was doing writing research incognito. It was resolutely unspooky and I was about to give it up as a bad job when I was shown into the final room. As soon as I stepped in, I began to buzz all over and - for no reason at all - welled up with tears. The guide took one shrewd look at me and said ‘you work with children don’t you? This is the children’s room. Don’t worry, they just want you to know they’re here. They like you.’ I couldn’t get out of there fast enough.

Nina says:
When I was at uni one of the girls in our house-share went to the loo, came back and said, 'I'm sorry for swearing, I didn't know someone's grandparents were here.' We all looked around puzzled - she'd bumped into an old couple in the hall who weren't really there! Oh, and when we moved into our house, we saw things constantly move around, the TV switched itself on, things flew off shelves. A friend who is a retired minister suggested we had the house blessed. I thought it was a bit extreme but did ask our local vicar who said house blessings are extremely common. I don't think our visitors have gone, they just aren't as objectionable as they used to be!

Cathy says:
Oooh, scary stuff!! Have YOU ever seen any ghosts or had a spooky experience? COMMENT BELOW to tell us more...
at October 31, 2018