My fab writer pal Sophia Bennett tells us how she wrote her latest novel, LOVE SONG... 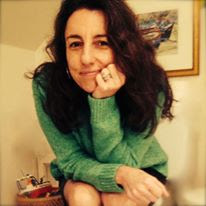 Sophia says:
In 2014 I began to wonder how much longer One Direction would be able to keep up with their seemingly endless world tours. I loved seeing their interviews, and how cute they were together, but thought it must be exhausting to be always on the road, away from their families, constantly being scrutinised. And yet, they got to see some amazing places too and have experiences together they would never forget.

And so I found myself dreaming about a band, and a girl, and wondering what it would be like to be with them. One Direction quickly morphed into The Point, a rock band with four hot boys based on all sorts of musicians I've known and loved over the years. The girl became Nina, a seventeen-year-old, cynical arts student like me, who knows she doesn't stand a chance with a rock star and wouldn't want one anyway. They just break your heart and ruin your life. Everybody knows that. 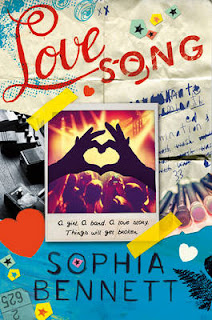 The first half of LOVE SONG follows Nina as she trails round with The point on tour, working as an assistant for the evil, diva fiancée of the band's lead singer, Jamie Maldon. She sees the incredible luxury they live in, the true passion of their loyal fans, and also witnesses the secret stresses behind the scenes. In the second half of the story, everything is different. Suddenly, the band are cut off from their world and their fan base, to make the new album they desperately need to produce, But they can't make music together any more. Too much has happened and their friendships have been stretched to breaking point and beyond. It will take a sensible girl 'who doesn't fancy any of them' to help put them back together. But is Nina really as safe from them all as she thinks she is? And what will happen when Nina discovers within herself the same love of music that brought them all together in the first place?

LOVE SONG was by far the hardest book to create of the seven I've written so far - and it's the one I am proudest of. It's a book about love, and music, and travelling the world... and being seventeen. I wish I could be a girl like Nina for a day, despite all the heartbreak she suffers. Perhaps we all secretly do...

You can find out more and order a copy of LOVE SONG here:
http://www.lovereading4kids.co.uk/book/12492/Love-Song-by-Sophia-Bennett.html

Cathy says:
This book has just reached the top of my to-read list... I cannot wait to jump into the story! What's the best book YOU have read recently? COMMENT BELOW to have your say!
at April 08, 2016