Reader Hollie tells how she first discovered CC books... and then rediscovered them after a break of five years! 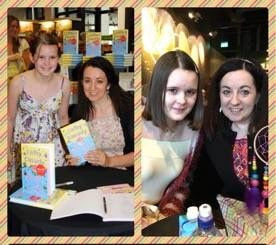 Hollie says:
I first found the book DIZZY in the library round the corner from my house. I love camper vans and this was when the covers were shiny too, so I was immediately attracted to it! I started reading and fell in love with the story, and I remember taking the book on holiday to Devon with me. I quite young, probably too young for the books - I remember asking my mum what 'vegan' meant and she had to explain that particular style of eating to me! I read LUCKY STAR next and was completely enthralled... I was a fussy reader and got bored easily, but CC books were impossible to put down!

I would read a whole book in one night, going through DRIFTWOOD and SCARLETT and SUNDAE GIRL pretty quickly. Then I read them all again, so many times I can't count. I can still picture the images I had in my head of the characters, still imagine the lough in SCARLETT, the beach in DRIFTWOOD and of course DIZZY's mum! ANGEL CAKE came out when I was eleven, and I found out CC was doing a signing at Waterstones Bluewater. It was advertised on the CC website, where I spent a lot of time making up poems and posting drawings of favourite CC characters. I was so excited, and then realised the signing was on my sister's 13th birthday. Noooo! As a family, we decided I could still go, so I finally got to meet Cathy. 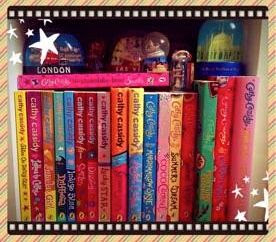 I was also planning to go along to the signing for CHERRY CRUSH, but unfortunately I was ill by then (and devastated to miss it.) It turned out to be quite a long illness, so I wasn't well when the rest of the books came out, but since I've been in recovery I have been reading all the new ones - and the old ones - over and over, and I love them just as much as ever. I started re-reading them when I was eighteen (that was a horrific five-year Cathy-break) and Cathy agreed to meet me at Bluewater again before her BROKEN HEART CLUB signing last year. CC books are my childhood. I will never grow out of them and doubt I'll ever reach an age where I won't want to read them!

Cathy says:
Wow... Hollie is that rare and awesome thing, a reader who has in time become a friend (along with her lovely family!) It's wonderful to know that she is one of many readers who've grown up with my books - and don't want to let them go! Do CC books have a special place in YOUR life? COMMENT BELOW to tell us more!
at July 29, 2017