HOW TO BE A DOMESTIC GODDESS... OR NOT!

Reader Ruby tells us about her vow to become a culinary superstar before leaving home for uni this autumn... maybe... 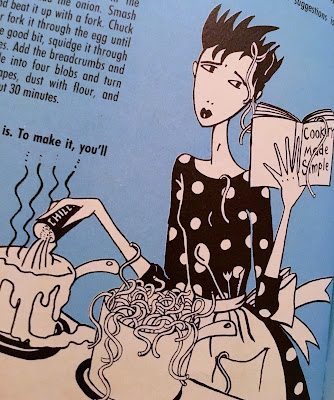 Ruby says:
I study hard, I am all set to get good A level results and I have an unconditional offer to the university course of my choice for October 2018. Sometimes I feel like the luckiest person ever... smart, grown up, and independent, with my life on track. And then I step into the kitchen.

I don't know why it is that I can pass exams and yet be too dim to make a piece of toast without burning it, but that's me. I am allergic to the kitchen. If I boil an egg it turns out hard as a bullet - or gloopy and raw. The last time I tried to boil pasta, it formed a congealed rubbery slab in the base of the pan, and had to be scraped into the bin. I am a kitchen disaster.

This all started when I was little and was given a book for Christmas that had lots of fun things to do in it. One of the things was to make fudge, and I decided on Boxing Day afternoon to whip up a home made sweet treat for the family. I sneaked into the kitchen and started boiling up butter and sugar, just like it said in the recipe, and the next minute the smoke alarm was screeching and the pan was on fire and my dad raced in and had to actually throw it out of the back door into the garden. (The pan never recovered and had to be thrown away.)

The thing is, I know my kitchen allergy is pretty feeble. I also know that unless I learn to cook soon, I will starve to death when I leave home for uni... and my flatmates will laugh at me, which is almost worse. So my New Years Resolution is to learn to cook... starting with the basics, such as not destroying so many saucepans or burning the cooker every time I go near it. So far, I have mastered the skill of chopping and frying an onion (it made me cry but life is cruel, right?). I have learned not to burn toast (you have to stand over it and not take your eye off it, which is very boring). Next week I will be attempting to add cheese to the toast - NOT in a toaster, before you ask.

The plan is, by October I will be able to make a three course dinner and bake a show-stopper five-tier chocolate cake. I will be the hero of my student flat, and always in demand to cook student dinner parties, and they'll nominate me for Masterchef or Bake-Off or something. Move over, Nigella, I am on my way!

Cathy says:
Ruby's post really made me laugh - and it struck a chord, too, as I am no great shakes in the kitchen either! I wish her well! Are YOU a kitchen queen? COMMENT BELOW to tell us more!
at January 19, 2018