More readers tell us about when they met Cathy Cassidy... 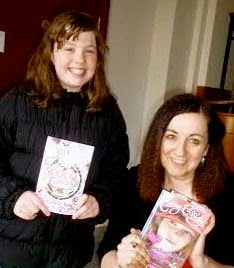 Amy says:
I've met Cathy once, at the Children's Book Festival in Cardiff, in 2014. It was amazing! I went with my best friend Angharad and her little sister Lowri; oh, and my mum and sister too! They all said it was fantastic! Cathy was talking mainly about her life and her new book COCO CARAMEL and how she gets ideas and develops them into stories. I queued up to get COCO CARAMEL and MARSHMALLOW SKYE signed. I have loads of others but Mum didn't let me bring those as she said it might be too many! I love reading Cathy Cassidy books... as part of the talk there was a quiz to see which Chocolate Box Girl you are most like, and I was like Skye. She's my favourite character so I was happy with that! Cathy was really chatty and friendly and I can't wait to see her again! 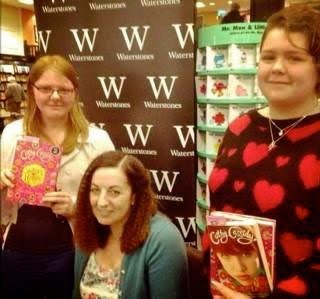 Chloe says:
About a year ago I contacted Cathy to say I'd be attending an event in Edinburgh. It was going to be a birthday surprise for my friend Shavonne. I told her we were going to Edinburgh for the day and we went to the bookshop. We saw the display of SWEET HONEY books and there was a sign saying Cathy was there. My friend was got so excited she hugged me, so the surprise was a good one! We queued and when we met Cathy she knew who I was, and I remember being so amazed I almost knocked over a huge pile of books! We would both love to meet Cathy again… maybe for tea and cake!

Molly says:
My brother Harry and I met Cathy at a signing in Waterstones in Bluewater - she signed a big pile of books for us! We asked about the next book and asked if she would ever write a book about a boy and Cathy said she already had (LUCKY STAR) but that another book from a boy's viewpoint was being planned and that it would be called FORTUNE COOKIE! I asked if she would include my brother Harry in the book… not sure if that will happen but you never know! I had sent Cathy lots of emails and she'd always responded, so I said thanks for that, and for reading the stories I sometimes send. We had a great day!

Piper says:
I met Cathy at the Bath Literary Festival in the autumn of 2014. I went along with my mum and we attended the SWEET HONEY talk which was great… Cathy's favourite book from school was WATERSHIP DOWN which was my mum's favourite, too! I had been looking forward to the festival for ages, but then I broke my ankle badly a few weeks before the event and I was so upset as I thought I might not be able to travel… but my mum and gran made sure it happened and we all had a fantastic weekend in Bath. Afterwards I even wrote up a feature about the day for the DREAMCATCHER blog-zine!

Cathy says:
Meeting my readers is one of the very best bits of my job… and in February I'll be on tour again, meeting lots more awesome readers! Have you ever met me on my travels? Where? And if not, where would you like me to visit next time I'm doing signings? COMMENT BELOW to let me know!
at January 16, 2015