Imagine growing up in the 1950s... what kind of careers might you have dreamed of? Back in the 1950s, these were the dream jobs many teen girls aspired to, according to a well-known UK women's magazine... 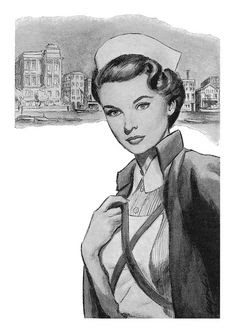 NURSE:
The NHS had not long come into being, and nursing was a very popular career. Children's dressing up sets with a nursing theme were very popular. Training was often given on the job, and trainee nurses might be expected to do anything from administering medicine and assisting in operations to washing patients or making beds. Nursing was a respected career and is still a hugely important job today, although it is not paid as well as it should be.

SHOP ASSISTANT:
Shop work was often seen to be a better option than working in a factory, and jobs in smart department stores were the most sought after posts of all. Those who had a skill for retail were valued highly, sometimes moving into management and often ruled over their departments with a rod of iron as well as commanding the envy and respect of their friends. 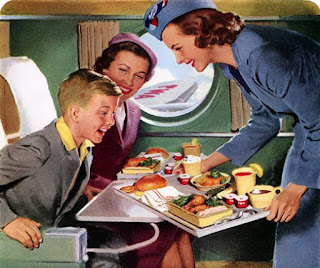 AIR STEWARDESS:
Teens who dreamed of travel and glamour back in the 1950s often aspired to a career as an air stewardess. Air travel was slowly becoming mainstream, but it was not until the late 60s and 70s that ordinary families began to take overseas holidays. Being an air stewardess was unusual and exciting back in a time when air travel was reserved for the wealthy.


FLORIST:
Artistic girls might be encouraged towards a career in floristry back in the 1950s... it was a job that required visual flair and also offered the chance to follow your own style and perhaps, eventually, even to be your own boss. This job also held an element of glamour... many girls in the 1950s worked in shops, offices or factories so there was something different and arty about this career.

TYPIST:
Working as a typist or secretary was seen as a real step up from factory work, so learning to type (with a fast speed of words-per-minute) and to read and write shorthand were real skills. A teenage typist would start out in the typing 'pool' - a room full of women typing up various information - and if they had potential, would move up to become a secretary or clerk. In the days before computers and internet, good typists were essential to almost every kind of business. 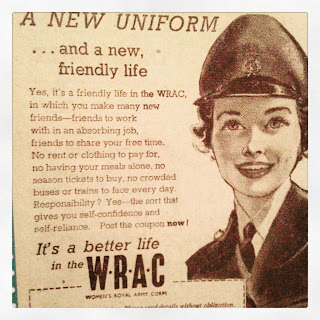 THE ARMED FORCES:
When the 1950s dawned, World War Two was still only five years in the past and National Service for men was still compulsory. Women were needed in the armed forces too, the army, the air force and the navy, and adventurous young women were attracted to this work. Although many were still doing traditional jobs within the forces, such as secretarial or nursing tasks, the chance was there to try other things too, and travel was a very real possibility.

HAIRDRESSER:
After the war, women were beginning to have the time, money and opportunity to pay more attention to their appearances and trips to the hairdresser were once more an option for some. A career in hairdressing was not only suited to artistic and sociable girls, but offered the chance of longer term work at a time when many women gave up their jobs once they married and had children. Hairdressing was a skill which could sometimes be done from home.

CATHY SAYS:
Although I wasn't around in the 1950s, the older women in my family worked in jobs like these - my mum worked in the wages office of a car factory, one auntie worked in a department store and another was a 'Wren' - a member of the Women's Royal Navy. It was very hard for girls to do jobs that were considered to be a man's work... if you wanted to be a truck driver, a vet or an engineer, you would have had a tough struggle ahead of you to achieve those dreams. In some ways, women had more freedom during the war, but a decade on they were expected to let go of that and step back into more traditional roles. Would YOU have liked to do any of these jobs? If not, what would you rather choose? COMMENT BELOW to have your say!