CRIMES AGAINST FASHION: THE SEVENTIES!

Back when I was a teenager, Jackie magazine was my guide to all things cool... and fashionable! Let's just say the seventies was a slightly scary decade... 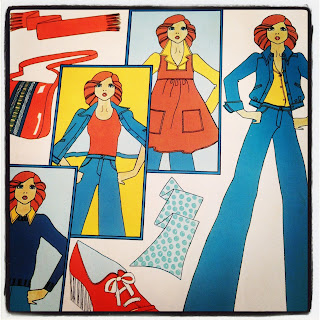 Cathy says:
I bought my copy of Jackie magazine every Wednesday, and read it from cover to cover... I learned how to be a teenager from Jackie mag, and one of the things I loved was that it kept me up to date on the latest fashions. The fashion pages were always illustrated in those days, perhaps because it was cheaper than organising a model, a photographer and a crateful of clothes! One of my early ambitions was to be an illustrator for the Jackie fashion pages, and once I sent off some paintings inspired by one particular spread and got an encouraging letter back from the magazine!

There was just one problem... much of the fashion back then was not my style at all. I was not a fan of flared jeans and shirts with collars that might as well have been wings, the way they flapped about in the wind. I didn't like platform shoes (although I had some scary bright yellow ones) and popular haircuts like the feather cut left me cold. I did like the fashion for smock tops, though, and made one in needlework class at school. I was very proud of that! I also had a pair of dungarees that I loved a lot! 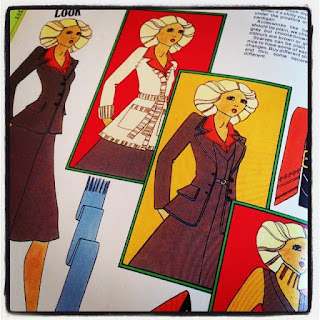 Casual clothes were fine, but anything smart was pretty grim. The brown suit in the picture here is horribly similar to a brown trouser suit I had at one point... it had been a present, and I hated it. Brown was very popular back then, but brown crimpeline flares and a blazer top? NOOOO!!! Later on I had to stick to a brown colour code in sixth form, and managed to have fun with it... tabards, layered skirts and woolies with peruvian style prints were in fashion by then. Skinny jeans had also appeared, part of the punk movement, and soon I had ditched brown crimpeline for drainpipe jeans, my dad's old outsize 50s jumpers and Converse trainers (yes, we had them back then too!). Punk was a breath of fresh air... and then I went to art college and discovered the joys of vintage shopping, and I've never looked back.

I don't miss 1970s fashions, even though they definitely count as vintage now! I'm glad to have grown up in that decade... even if it sometimes seems like a whole different world to me, now. And I still miss Jackie mag. There has never been anything quite as cool!

And now? My daughter is into vintage, too. Seventies style...

Cathy says:
Would YOU have worn any of the styles pictured? COMMENT BELOW to have your say!
at February 11, 2016