Recently I wrote about growing up in the 1970s, and lots of you liked the fashion pics I posted... so I thought I'd share some more seventies style with you! 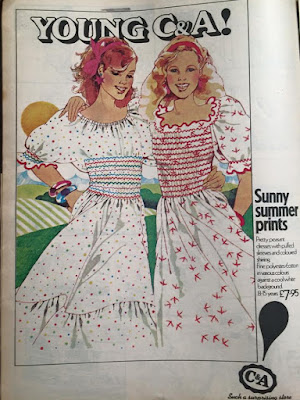 Cathy says:
I remember when C&A was a cool place to buy your clothes. OK, maybe not a COOL place, but a place... it was a department store that sold clothes for all ages, and it was cheaper than a lot of the other shops, so most of my clothes as a teen came from there. I had a dress a little bit like the ones on the right when I was thirteen - very pretty and cute with lots of ruching and a flowery print. Two years later I had a brown party dress (who ever decided that brown was a party colour?) made of various contrasting Indian prints, and some tassels hanging from the waist, also from C&A. I never quite looked like the girls in the illustrations in Jackie mag, but I tried to follow the fashions, even when I wasn't all that sure I liked them much.

Make up was even harder than clothes.... I didn't have a clue. My first foray into the world of make up came at the age of eleven when I went on my first trio to town without an adult in tow, with a school friend called Siobhan. She was quite grown up and sophisticated... she loved the colour purple (almost as cool in the 1970s as brown!) and had a brilliant pair of purple flared dungarees and long light brown hair as straight and shiny as a model's. We headed straight for the make up counter in Boots and tried as many samples as we could - then we both bought an eyeshadow. The same eyeshadow, the coolest one in the whole shop. It was a tiny, push-up, lipstick-like tube of purple eyeshadow and cost about 40p. We ran into a nearby department store and went straight into the Ladies loo, where we smeared stripes of purple onto our eyelids and strutted around town feeling very grown up. We probably looked ridiculous, but who cared? We didn't. 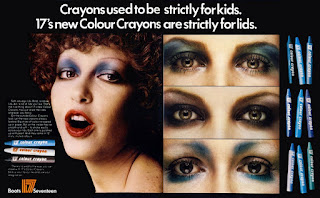 A few years later, my favourite make up item was a strawberry flavoured lip gloss. It made my mouth look sticky and shiny, but it tasted nice. When punk came along, I got very good at painting on bright yellow eyeshadow alongside purple and blue. I looked like I had a couple of black eyes, but again, who cared? It was the fashion! I didn't have much money for make up as a teenager, so I never really got to experiment too much... but a friend once shared her glitter gel with me at a party, painting my cheeks and lips and eyelids with silver sparkles. That was the day I wore my first and only high heels and danced all night with a boy I'd never met before in a shiny blue bomber jacket and clumpy boots. I got blisters and had to walk home carrying the shoes... bad news. And I never saw the boy in the bomber jacket again, which was probably a very good thing. I tried to be a cool chick in the 1970s, but I didn't really succeed. The 1980s, though... well, that was a whole different story. I'll tell you about it sometime... ;o)