FAYE: MY LIFE WITH LEIGH'S SYNDROME

Reader Faye lives every day with a rare and incurable disease, yet in spite of the challenges she has faced she has created a network to offer support, information and help for other sufferers. Read her inspirational story... 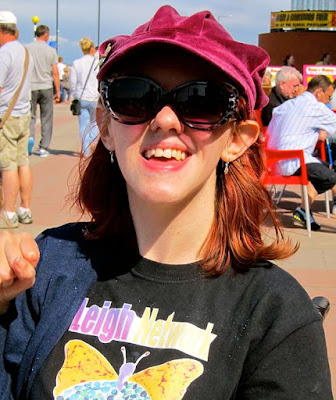 Faye says:
When I was three, my little brother Sammy was very ill. He had been a happy baby, reaching all his milestones until he was twelve months old. Gradually, he lost the ability to sit and to cry. After many tests, he was diagnosed with Leigh's Syndrome, a rare and very serious disease. Sammy passed away at nineteen months old, and it was a terrible time for my family. I was a healthy child, but at seven my walking went a bit wobbly; a consultant said I was OK, but things didn't improve. At twelve I had lots of tests done... I walked into the hospital and came out of it in a wheelchair. I have needed one ever since. I was very ill that summer, and over the following years more and more symptoms appeared... dystonia, fatigue, tremors and pain. Because of what had happened to Sammy, I worried that it might be Leigh's Syndrome and read up about it. A shiver of dread ran down my spine as I matched the tablets I was taking with some of the medications listed on the internet for Leigh's.

I found out I had Leigh's Syndrome officially on New Year's Eve when I was seventeen. I was told my health would only get worse, as the disease has no cure and is terminal. We handled this news alone, with no support - believe me, I looked. Later, at twenty two, I achieved a lifetime dream and began driving, but then I noticed my eyesight wasn't quite right and an eye test led me back to hospital. Tests discovered my optic nerve was damaged and I was classed as severely sighted and no longer able to drive. Blindness was a blow. I am a creative person - my clothes are waiting to be stained with paint, charcoal, ink - but my creativity must remain locked inside because I am blind. 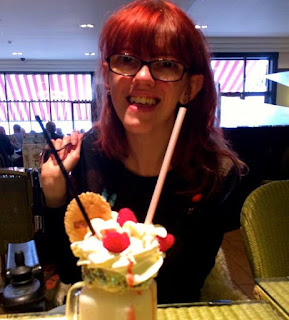 I had studied counselling and when I was twenty when I decided to found Leigh Network, a support group for families affected by this illness. I arrange meetings all around the UK and sometimes specialists come along to give talks and offer information and support. One of the aims is to break the isolation for families going through this, and I also want to raise awareness of Leigh's Syndrome and mitochondrial disease. Our meetings have an uplifting and positive atmosphere with lots of hope and joy. I hope we achieve these aims, and that we help others who are struggling. This is why I do what I do.

You can support the Leigh Network FB page and find out more about Faye's work HERE and check out the main website HERE. Please take a look and help if you can.

Cathy says:
Faye is one of the most inspiring young people I know. Instead of letting her illness defeat her, she works to help others and to raise awareness... she's awesome. If YOU want to send a message of support to Faye, COMMENT BELOW to have your say.
at October 08, 2016