Reader Sophie writes about what it feels like to be neither straight nor gay in a world which doesn't understand... a powerful post for Asexual Awareness Week. 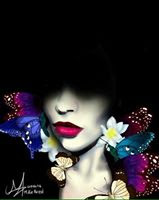 Sophie says:
Asexuality is where you don't like anyone in a sexual way. It isn't a choice, like celibacy, but a part of who you are. Asexuality is not a black or white thing but more of a scale, sometimes called the grey scale. On this scale is the category of demisexual, where you either rarely like someone or else only feel sexual attraction if you have a strong emotional bond with them. Some people may only feel attraction when they know someone very well, others will rarely have this kind of attraction. Asexual people are still capable of love, and some have relationships and do things like hold hands or kiss. Some prefer to be by themselves while others surround themselves with close friends. Most will also have a romantic orientation, such as hetro- romantic, homo-romantic, bi-romantic, pan-romantic, a-romantic and more.

I am asexual a-romantic, which means I don't like anyone in a romantic way. I knew I wasn't straight even before I knew I was asexual. People would say, 'Oh, isn't this guy fit,' and I couldn't see what they were talking about. This was quite a difficult time, because I felt there was something wrong with me. I had a girly chat with a couple of friends and when I admitted I had never had a crush on anyone, they suggested I may be asexual. I looked into it, and at once it clicked - it was like a huge weight lifting from my shoulders. People don't always get it and say things like 'You just haven't met the right person yet.' However, it is a part of who I am, and I wouldn't change it for the world.

One of the reasons I am so keen to spread the word about asexuality is because I don't want others to worry the way I did. I try my best to raise awareness - I spoke about the subject in my speech as Head Girl and later in an assembly with my school's LGBT alliance. However, it is still widely unknown - it's thought that perhaps one in every hundred is asexual. This week is Asexual Awareness Week so it seems a perfect chance to talk about it here.

If you are worried about your sexuality, speak to someone you trust. They might help you to understand how you are feeling, and also, sometimes it just helps to talk. Remember above all that YOU are amazing - just the way you are.

Awesome digital image by the very talented Millie A; you can follow her art page on FB HERE.

Cathy says:
A huge thank you to Sophie for helping raise awareness of asexuality. Have YOU ever felt you didn't quite fit into the regular mould when it comes to attraction? COMMENT BELOW to have your say.
at October 28, 2016