Did you dress up for Halloween? Readers share their most memorable Halloween costumes! 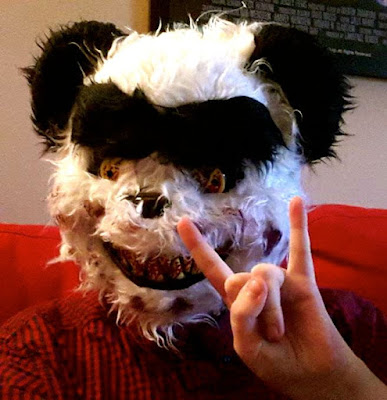 Violet says:
My best costume was in the days before constant selfies... 2010, I think. I dressed as Ophelia from the Shakespeare play Hamlet, post-madness. I wore a black dress and a white shirt splattered with blood... it was meant to be the shirt Polonius was wearing when he got stabbed. I messed my hair up and put on white lipstick (OK, foundation...) and black eyeliner with smudges of purple eyeliner to complete the look. I wore it to a party and then again the next night, trick or treating... most people assumed I was a zombie schoolgirl, but one old couple were pleased that I enjoyed Shakespeare and we discussed our favourite plays. They gave me chocolate, too! I haven't dressed up for Halloween in ages, but I did see a mask in Tesco I couldn't resist. I don't know what it is - some sort of angry panda? I'd be angry, too, if I had buttons for eyes. I'll wear it with a t-shirt with a glow-in-the-dark ribcage made up of little spiders I also found in Tesco, and that'll be my costume to answer the door if we get trick or treaters!

Melanie says:
My best costume was a Christmas tree costume my mum made... there are no surviving photos!

Katie says:
Last year I dressed as Cruella De Ville with an old drama costume for when trick or treaters turned up at my house. Back when I was about eight, I went trick or treating in America with friends... I had a full Hannah Montana costume! Not sure what I'm doing this year yet, but i am determined to make it the best EVER!

Trish says:
I dressed as Night and Day once... Mum sewed my best dress and my nightie together, half and half, and I wore one shoe and one slipper. My hair was half styled and half in curlers and I wore half make up and half night cream. Genius! 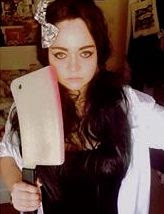 Kym says:
Last year I went as an adult Wednesday Addams because I completely dig all that creepy stuff anyway. I'm not dressing up this year as I'm not feeling it, but I will still decorate the house and we'll stay in eating sweets and watching movies!

Joanne says:
I went as a Day of the Dead skeleton (dia de los meuertos) last year. I wore face paint with flowers around my eyes and a dress with flower patterned ribs and bones. It was surprisingly beautiful! The year before that I was a gothic Red Riding Hood!

Laurel says:
My family and I dressed up as characters from Scooby Doo, which was brilliant - I was Velma!

Caoimhe says:
This year I dressed up as a dead bride for drama class and loved the costume! I wore a long veil with black and silver roses on it and a grey dress with cobwebs and flowers. There was a hologram of a rose and a dead bride on it which was really cool. I put on grey make up but when I turned the light on it looked blue... really spooky!

Cathy says:
A quiet Halloween for me, as I'm a bit too sad still to be celebrating anything, but I have loved hearing about these ideas... some great and inspiring costumes! What was YOUR best dress up idea for Halloween? COMMENT BELOW to tell all!
at October 31, 2016