Reader Jemma and her sister decided to make some origami paper cranes... find out how... and why! 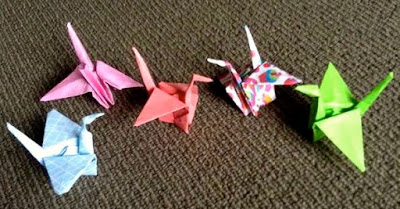 Jemma says:
I got the idea of making paper cranes from Cathy's book BROKEN HEART CLUB. In the story, the friends make paper cranes and the cranes hold a lot of memories for them, including love, sadness and confusion. I looked up how to make the origami cranes on the internet, but it looked confusing so I gave up. My sister had a book on how to make them and I looked at that, but again I found it tricky and gave up. Then my sister began making them for me and suggested I do some parts while she did others parts, and we came up with a routine that suited us both. By the end, I was basically making them myself! I used origami paper which was great, and some ordinary paper which was a bit harder to use but did still work!

In the end, we made 82 paper cranes... it's not quite a thousand, but they look amazing. We have put them on string and hung them all around my bedroom, and I love them! I have stopped making paper cranes for now - after all that folding I am taking a break! I may do some for other people after a while, I'll see. There is a Japanese legend that if you make one thousand paper cranes you can have any wish you like granted to you, but I didn't make a wish as I didn't get that far! I'm not sure I believe the legend, but I guess that if I get to a thousand one day I may find out!

I loved making the cranes - the moral is to keep trying if there's something you want to master, and it was worth it! The cranes look great, and make my room seem so much brighter and really cool, like a festival or a traveller fair. It reminds me of the CC book DIZZY! I had lots of fun learning origami, and message to other readers would be to try it too... windmills and flowers are good to start with, and all of those things will look great strung up around your room! Get folding!

Cathy says:
I love this! Jemma is right, it helps to have some show you the method for making paper cranes, but once you've got it, you can pretty much make them blindfold! Have YOU got a cool or crafty spin on room decor? COMMENT BELOW to tell us more!
at October 25, 2016