AFTER A FASHION: THE MIDDLE AGES

Reader Jess, a history and fashion fan, launches the first in a series of posts about women's fashion through the ages... starting with medieval times! Would YOU have worn a wimple and plucked your hairline? Yikes! Read on! 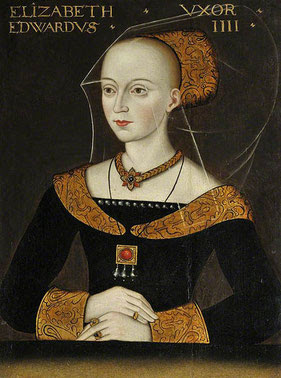 Have you ever wondered what you would be wearing if you'd lived in the UK almost a thousand  years ago? No more summery playsuits or flowery dresses, no more jeggings or fluffy onesies. You'd have been wearing a simple shift by way of underwear and a tunic or 'kirtle' on top, long and loose, fastened at the shoulders with brooches. That was it, apart from some form of stockings if it was cold, fur in winter and a scarf to cover the hair if you were married. Fabric was mainly wool and had to be spun, dyed and woven before being stitched into a garment, so clothes were expensive and the same items would be worn over and over. For rich women, clothing was a status symbol and the well off had access to finer fabrics such as linen and silk, as well as more costly dyes.


As the middle ages went on, fashion grew ever more elaborate. The waistline was emphasized and sleeves and necklines decorated with embroidery. The richest women wore elaborate head dresses, like the one above worn by Elizabeth Woodville, the wife of King Edward IV, which consists of an embroidered hood to cover the hair and a huge net or lace construction set on wire to 'float' above and around this. You may also notice her hairline, which looks as though her hair is thinning; wealthy women at this time would pluck their hairline to draw attention to their foreheads, as a sign of beauty and intelligence. Er... I don't think this would catch on today! In the second picture, from a French painting, you can see even more complicated head-dresses and veils and more evidence of hair-plucking, and the use of fur to trim the 'surcotes' or over-dresses. This tells us that the ladies in the picture were wealthy. 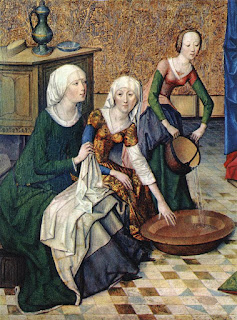 Most women would have worn simpler styles, similar to the image on the right. Laws were brought in to actually stop the ordinary people from dressing in a fashionable way - expensive veils, silver trimmed belts and the colours purple and gold we forbidden. Anyone disobeying the law was punished severely. One thing was certain, life was very hard indeed for women in the middle ages. Very few women were allowed to own land, and most were under the control of their parents and would be married off to a suitor of their father's choice. Even wealthy young women were traded into 'good marriages' as if they were possessions. Women worked very hard, in the fields, looking after animals, cooking, cleaning and weaving as well as many other tasks. 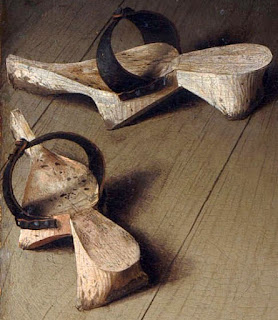 Because bathrooms and plumbing were not yet a thing, the streets ran with filth (often human waste) and even the nobility wore wooden clogs or shoes called pattens which lifted them up above the mess and kept their good shoes clean and dry. So... fashion in mediveal times was not all flowing velvet gowns and garlands of flowers, Maid Marion style, and life was very different to the way it is today. I would not like to be a teenager in the middle ages (I like my shower, soap and modern comforts!) but I would happily go back in time to see those amazing styles worn in real life.

To get a flavour of medieval fashions described above, check out the DVD of the BBC TV series THE WHITE QUEEN, based on the books by Philippa Gregory, which charts the rise to power of Elizabeth Woodville, the lady at the top of the page! She was a commoner who rose to be queen of England, and her story is amazing for any history fans. Plus... the clothes!!! It's a dramatic and visually brilliant series.

Cathy says:
Wow... I love the history of costume and this is so interesting! Would YOU have coped with medieval fashion... or life as a girl in medieval times, for that matter? COMMENT BELOW to have your say!
at August 29, 2016