We've shared some readers' holiday memories recently... I thought I'd join the party and tell you all about my long ago summers! #BlastFromThePast 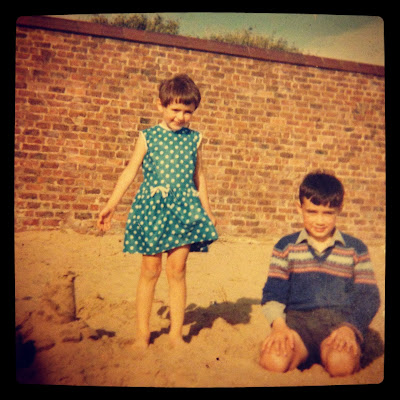 Cathy says:
My earliest holidays were trips north to visit my mum's cousins and aunties in Liverpool. We would stay with them and sometimes, as a special treat, we'd go to Crosby Beach. I always loved driving along South Road in my Auntie Sheila's white VW Beetle (so, so cool in the 60s, as was she!) and cresting the hill to see the sea on the other side... the best feeling in the world. At the end of the road, old ladies in shawls would sell buckets and spades, and we'd sometimes buy one and spend all day making sandcastles. We'd picnic, drinking fizzy Corona pop and eating slightly sandy jam butties, and I always spent ages on the trampolines that filled on of the beach front parks. The photo shows me on Crosby Beach with my cousin Ricky... my dress sense hasn't changed much since then, but luckily my hairstyle has! 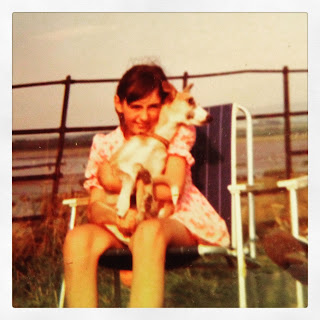 After a while, we started branching out with our summer holidays. My dad, who repaired cars for a living, acquired a clapped out camper van and we set off for the muddy Lancashire coast. Dad was searching for somewhere he could sail the boat he'd been making in the back yard (shades of Daizy Star?!!). We found a place called Glasson Dock which was pretty cool, stuffed with boats and with a slimy, barnacle encrusted slipway that led down into the water where people launched their boats. There was even a cafe on a boat called the BaBa Gee, where we sometimes had a chippy dinner as a special treat! This pic shows me aged nine or ten, with the muddy estuary behind me and our whippet Smokie in my arms. This was probably the holiday where I took her for a walk and ended up chasing her for miles along the seafront because she was chasing another dog. The camper van had pull out hammock beds in the roof, and a camping stove where we cooked up baked beans and made tin mugs of milky coffee. Eventually, Dad brought his home-made boat up to Glasson and moored it there, and we spent one night sleeping on it, under an awning made of sails. It was very exciting, except when the tide came in in the middle of the night and we spent two hours bobbing around. My brother, still only a toddler, cried so much that Dad had to put him and Mum in the canvas dinghy and row them ashore to the safety of the camper van! 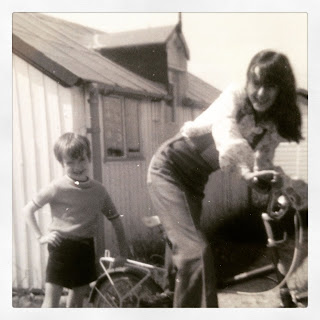 We struck holiday gold when someone told my dad about an old hut on a farm near Glasson Dock, up for sale. That hut, the size of a small garden shed, became our holiday home for the next ten years. I LOVED being on a farm and developed a big crush on the farmer's son, but got very upset when the newborn calves were taken away from their crying mothers, or when the farm lorry came to take the half grown lambs to market. I was never cut out to be a farmer's wife! In the picture, I am about twelve... wearing flared dungarees and a horrible shirt with puffed sleeves and a flyaway collar. It was all very trendy for the 1970s, I promise you, but I guess that's no excuse! My brother is in the pic too, and I'm riding my Raleigh bike, a sort of half hearted copy of the iconic Chopper bike which was so popular in the 70s. Dad sometimes dropped us up at the shed and went back home to work, so we'd spend weeks of the summer messing about on the muddy beach, swimming in the sea (very polluted, this was pre EU regulations, yikes!) and cycling around the country lanes. When Dad arrived back, we'd go sailing, heading out to beach ourselves on a sandbank at low tide and staying there all day until the tide returned to allow us to return.

My childhood holidays were all done on a shoestring, but they were magical all the same. What are YOUR happiest holiday memories? COMMENT BELOW to tell us more!
at August 13, 2016