CATHY CASSIDY: WHAT HAPPENS AT A LIBRARY BOOK FESTIVAL!

Ever wondered what a book festival event would be like? Here's a sneaky peek into what went on at the recent Bebington Youth Bookfest! 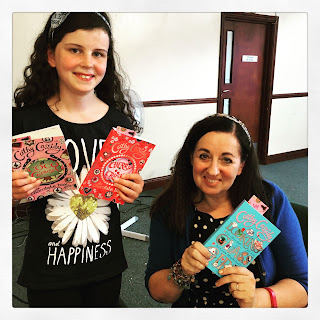 Cathy says:
Book festivals are all different... from the awesome big ones like Edinburgh and Hay to the smaller ones, and when a new festival sprouts up you never quite know what to expect! I recently spent a day at the brand new Bebington Youth Bookfest, doing two writing workshops and then a regular book talk event. The day was boiling hot, and I worried that people might not turn up... what if they preferred to be in the park or at the beach? I shouldn't have worried! I knew it was going to be good when I was picked up at the station by one of the organisers and taken to the library venue to be offered coffee and cake. That's definitely my kind of festival! There was a tuck shop set up for readers too, and a 'parent creche' for adults who wanted to chill out with a cup of tea! 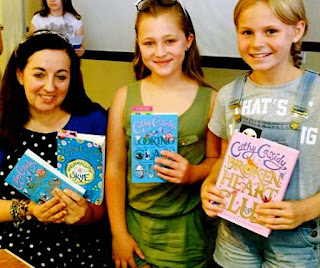 The workshops were both fully booked, and soon readers of all ages were arriving and settling down... and making new friends in the process! All the young would-be writers had been given a free notebook and pen by the festival, so we kicked off by talking about ideas and inspirations and having a notebook handy to capture them! I set a few warm-up writing exercises and then asked the students to  name and build a character and put them into a story. We looked at how to use the opening of a story to hook the reader's interest... and I read out a couple of extracts from my own books to show what I meant! Students were encouraged to read out what they'd written, and the room was soon buzzing with creativity. When the hour and a half was up, I signed books for those who had bought one from the bookstall or brought one in from home... and while I was signing, the room filled up all over again with a whole new group of young people arrived for the next workshop session! After finding a few extra chairs and tables for some unexpected extras (we didn't want to turn anyone away!) we got going with a different slant on the writing workshop, focusing on a friendship theme this time. There was a LOT of talent in the room!

After the second workshop, and the signing afterwards, there was a short break for lunch (more cake!) and then it was time to tweak the PowerPoint presentation as the hall filled up for the book talk. Many of the kids from the two morning sessions returned for this, and a whole lot of others too! My book talk has lots of slides and shows how and where I work, how I research when writing a book and how I plan. There are slides about DREAMCATCHER, the CC website and the fabby CCTV YouTube channel too, and a quiz for readers to see which BROKEN HEART CLUB character they have the most in common with! There was yet more signing at the end, and I went home on a real high, having met so many lovely and talented readers. So if you're thinking of going along to a book festival to see your fave author, give it a go... I bet it's just as awesome! 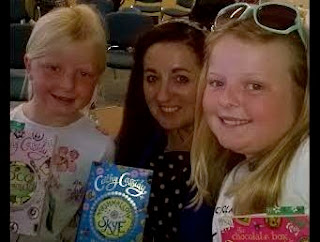 Reader Zoe had this to say about the day...
On hot days, I like to play out, but instead I went along to the library to meet Cathy Cassidy! She did an AMAZING workshop and taught us how to make characters and stories and how to use notebooks for story ideas. Later on she told us about her books and her website, and also how she planned and got inspiration and how she wrote her books. It was fabulous in every way! I was so glad I'd gone along to meet this awesome, cool and funny author and I loved every minute!

Cathy says:
Have YOU ever been to a book festival? What was it like? COMMENT BELOW to have your say!
at August 30, 2016