A BOOK FOR CHRISTMAS: THE CHRISTMASAURUS!

Looking for a book to get you in the mood for Christmas? We've got just the thing... sit back and see what reviewer Jenny made of Tom Fletcher's THE CHRISTMASAURUS! 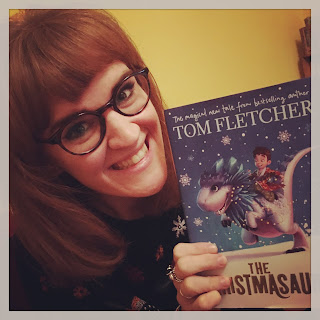 Jenny says:
Yesterday I sat and HAD to read Tom Fletcher's amazing new book THE CHRISTMASAURUS.
And I HAD to read it in one sitting. It took me two hours, fifteen minutes and twenty two seconds - ALMOST identical to the time it took the Christmas elves to make their startling discovery in the story. The book made me make a few weird noises like 'nawwhhahaa' and 'eeoowhhh,' but mostly I laughed out loud at unexpected funny words, sighed sadly at unexpected sorrows and gasped super-surprisingly at unexpected twists and turns in the plot.

Before, during and upon finishing THE CHRISTMASAURUS, the same feelings washed over me that I get on Christmas Eve: magic... and excitement... and wonder!

'They believe beyond any shadow of a doubt, and belief is the most powerful magic there is. Belief is the only magic that makes the utterly impossible completely possible, and the undoubtedly undoable undeniably doable! And of all of the different kinds of belief there are, the belief of a child is by far the most unbelievably unstoppable.'
(The Christmasaurus, Tom Fletcher)

So, this must mean something great - I'm a GROWN-UP who DEFINITELY believes in magic and excitement and wonder! And if I can do it, you definitely can. Believing is seeing - and that's got to be true, because it's in a book AND a blog!

PS: Dear Santa,
All I'd like for Christmas is to have magic, glittery smoke puffing from the chimney in my house. Oh, and a dinosaur. Thanks!
Jenny x

Cathy says:
Love this review - it makes me want to rush out and buy the book, which is brand new, beautiful, and just released. THE CHRISTMASAURUS is aimed at age 7+ so would be an ideal pressie for a little brother or sister, or one to snuggle up with yourself for some good old fashioned Christmas fun! What is YOUR fave book with a Christmas theme? COMMENT BELOW to tell us more!
at December 09, 2016