Blogger Kym has reviewed the film A Street Cat Named Bob for us... read on to find out if it should be on your festive viewing list! 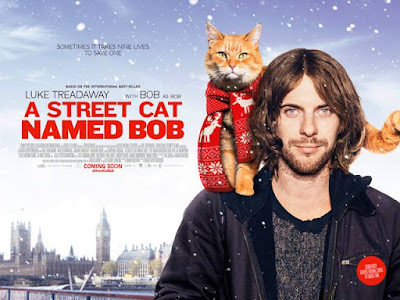 Kym says:
A STREET CAT NAMED BOB is a film (rated 12A) based on the book of the same name by James Bowen. The book is based on his own life and his journey to overcome homelessness and addiction. At the start of the story, James (played by Luke Treadaway) is sleeping rough and struggling with addiction while on a recovery program to help him get clean. His support worker Val (played by Joanne Froggatt) pulls some strings and gets him higher up on the waiting list for a place to live, as she can see the potential in him and knows that he has the determination and ability to beat his addictions and make something more of his life.

Things are never straightforward, but James finds a stray cat called Bob (played in the film by Bob! Yes, the REAL Bob!) and the two form a very tight connection. I won't give any plot details or spoilers here, but it's fair to say that without Bob by his side, James would not have been able to find his happy ending. 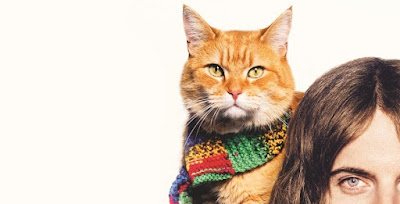 It's a true story, too, so I think we're allowed to enjoy the ups and downs of emotion and really get behind the whole thing! I read the book first a few years ago, so I was really looking forward to seeing the film - it was even better than my expectations! A STREET CAT NAMED BOB is one of my top films for 2016 - loved it.

Cathy says:
I am determined to see this movie before Christmas... I've watched the trailer and I was hooked! I haven't read the book and I didn't know the story before, but Kym's review just confirms my suspicions that is one is a must-see! Have YOU seen a film you loved lately? COMMENT BELOW to tell us more!
at December 12, 2016