Have you ever lost a treasured animal friend? Cathy writes about the recent death of her beloved lurcher Kelpie... 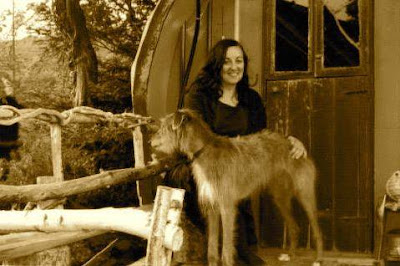 Cathy says:
The first time I met Kelpie, she was twelve weeks old. She'd been born in rescue kennels, her mother found abandoned on the streets of Glasgow. Kelpie had already been rehomed twice and brought back to the kennels twice by the time I met her... she was an anxious, nervous dog and had a habit of shredding things when she was upset, but really? Brought back to the kennels TWICE before she was even twelve weeks old? She jumped up at me, scratched my lip and made it bleed, but I could see the hope and panic in her eyes. She came home with me that day. 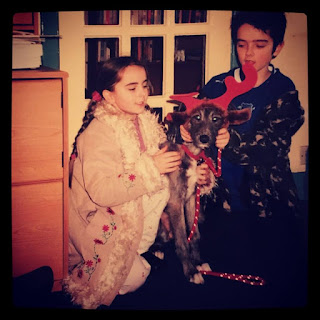 Kelpie fitted into our family easily. Our elderly cat made it clear he was the boss, and she quickly sussed that the pet rabbits were family too. My kids, aged eight and nine, loved her on sight, and my son even managed to forgive her when she ate his entire copy of LORD OF THE RINGS. My daughter and I took her to dog training classes, where she was the worst in the class - but she was brilliant at recall, because she always wanted to be with me, and after ten weeks she was given a certificate to say she had passed. (I think they were just being kind!) My daughter did dance every weekend, and while she was at lessons Kelpie and I walked for hours on Ayr beach - Kelpie chased the seagulls and never quite worked out why she couldn't catch them. She still hated being left, and once when I had to rush a poorly daughter into the toilets at the supermarket after a dance class, we returned ten minutes later to find Kelpie had torn up the back seat of the car. Oops! 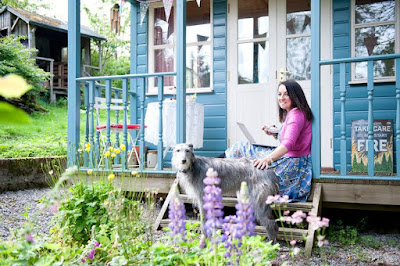 Kelpie was a loner dog by nature, but after my dad died in 2007 we adopted his rescue greyhound, Daisy. Later, we found ourselves fostering a rescue lurcher, Finn, who ended up staying too. By then, our old cat had died and Kelpie was also putting up with three tough cats and several more rabbits. As long as she had us, she didn't care. She came on holiday with us to Ireland and the Lakes, and we discovered that she hated camping, loved camper vans and adored the tepee we bought after my first book DIZZY was published. In fact, the character of Leggit in DIZZY and LUCKY STAR was based very firmly on her! Kelpie often appeared in Puffin publicity shots and photo shoots, though attempts to dress her up as a festival dog always failed - if I tried to put a bandana round her neck, she'd just eat it. (If you spotted the reindeer antlers in the pic above, know that they stayed on her head for roughly three seconds...) 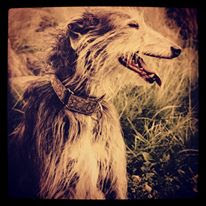 The problem is, dogs don't live as long as we do. By the time we moved from Galloway to Merseyside, Kelpie was slowing down. I gave her supplements to help her joints and runs in the park with Finn kept her young, but by the summer of 2016 I knew she was struggling, getting forgetful, and needing painkillers for her achey hips. Her heart was weak too... my lovely dog friend was sixteen and getting old. When my mum died this October, the whole world seemed to slow. We carried on, but every day felt like an ordeal, and in the midst of all this I could see Kelpie starting to fade. Still, every day she liked to run in the park. One day, we commented on how well she was running. She circled the park, chasing Finn who was in turn chasing squirrels. She followed him up a little hill and vanished out of sight, and when Finn came back Kelpie didn't. I found her fallen at the foot of the hill, unable to stand and screaming when we tried to lift her. Liam ran home to fetch my son and I sat beside her in the morning mist, telling her she would soon be flying high, catching the seagulls and squirrels she'd never managed to catch in life. We lifted her onto my parka and into a wheelbarrow (she was a big dog, a deerhound cross) and we took her back to the house and on to the vet, who told us it was time to let her go. I held her, stroked her, cried into her fur as she slipped away.

Kelpie was a very special dog to me, a soul sister. Her nervy, enthusiastic, sometimes grumpy and dishevelled persona was the dog equivalent of me, and I miss her just as keenly as if she had been human. If there is an afterlife, I hope she'll be there, waiting for me, running faster than the wind through the clouds to catch imaginary seagulls. I will never forget her.

Have YOU ever lost a much-loved pet? COMMENT BELOW to tell us more, or write to Cathy via the EMAIL CATHY link on www.cathycassidy.com to tell us more.
at December 03, 2016