Readers share the madcap antics of their pets this Christmas... Miaouu! 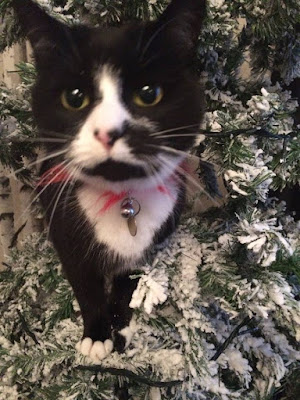 Our cat Sprout is obsessed by the Christmas tree every single year, which is why we only put it up on the last weekend before Christmas. Even then, he has gone crazy, knocking almost all the baubles off the lower branches and trying to climb up the tree. We have to make sure he is never in a room alone with the tree!

Louise says:
Our Christmas pet disaster involved our new puppy, Skiddle, who is about nine months old and chews EVERYTHING. She was quite good while we were putting up the tree, we were surprised - she just had a look at what we were doing and a nose around the box that holds the decorations, and then wandered off again. Mum was boasting that she was a such a good dog and no trouble at all. And then we came to the point where we had to put the fairy on top of the tree, and there was no fairy to be seen anywhere. You guessed it... Skiddle had nicked her and by the time we found her, the fairy was basically chewed into three bits. We had to get a new one. Oops.

Kelly says:
We came home from Christmas shopping one day to find the whole Christmas tree collapsed on the floor and the baubles all over the carpet. And the cat asleep on the sofa.

Mia says:
Last year, our dog Prince opened a present from under the tree that was a big bar of chocolate, and ate most of it. We had to take him to the vets because chocolate can be poisonous for dogs, so BEWARE... our pressies and tree go up on a sideboard these days! 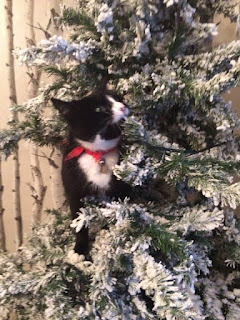 Hannah says:
Our dog Jay is so curious about the Christmas tree he has toppled it over twice in the last few weeks. My mum has now put up an old child-proof fireguard around the tree, which doesn't look as good but does at least keep the tree upright and Jay out of mischief!

Ana says:
Our cat stole a big lump of Stilton cheese RIGHT OFF THE TABLE on Christmas Day 2015, while we were all sitting around talking. She ran straight out the cat flap with it. This year we've wrapped up a tiny slice of Stilton to give to her!

Fab pictures of the beautiful Muffin by my friend Lynn.

Cathy says:
Badly behaved pets at Christmas... where do I start? Ours have committed SO many crimes over the years! Are YOUR pets naughty at Christmas? COMMENT BELOW to have your say!
at December 27, 2016