Reader Blue shares a spine-chilling winter story with a twist... this one is NOT to be missed!

As snowflakes landed on her cheeks, Elspeth's eyelids fluttered open. What was she doing here, lying on her back in the snow? She'd catch her death of cold! Elspeth didn't know where she was but she spotted a road not too far in the distance, a dark grey ribbon that twisted and turned as it disappeared over the horizon, promising to show her the way home. She stumbled towards it. Although she wasn't sure how she'd ended up asleep in the snow and didn't remember leaving her home, she had some theories. She'd been so stressed lately, trying to juggle uni coursework with a retail job. She'd probably come out for a walk and fallen asleep from exhaustion. How embarrassing! She hoped her family wouldn't ask what she'd been up to because she didn't think 'Napping in the snow, y'know, the usual,' would go down very well. 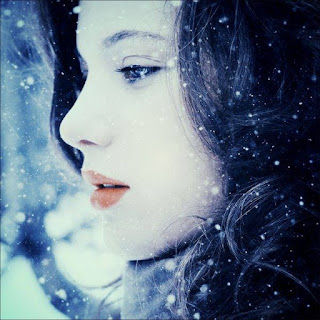 As it turned, Elspeth's home wasn't too far and after twenty minutes of sticking to the side of the road, she'd reached her house on the outskirts of town. The back door was ajar, the smell of cinnamon and apple drifted out. Elspeth slipped in... and came face to face with her father.

He didn't react, he walked past her and slumped at the kitchen table with a grunt, staring listlessly at the newspaper he held in his hands before setting it on the table. He'd always been a man of few words but that seemed rude.

Perhaps he was tired, he looked like he hadn't slept in days and his crumpled clothes hung off him. Too many late nights at the office, probably. Her mother hadn't even glanced up from where she stood at the hob, stewing apple and cinnamon, probably for one of her delicious homemade apple pies. Elspeth hoped she could have an extra big portion, all that sleeping in the snow had left her feeling distinctly washed out. Being ignored by her parents wasn't helping. Perhaps they were mad at her for being out for so long - Elspeth wasn't sure how long she'd been asleep but it must have been a while to merit the silent treatment.

The door from the hall creaked open and five year old Joe stood in the doorway. His eyes met Elspeth's and she grinned at him. 'Hey Joey!' she said to her little brother.

'Elspeth?' he whispered. Then 'Elspeth!' as he scurried across the room, arms outstretched as their parents heads swivelled round at the sound of his voice. Elspeth held out her arms to catch him in a hug. The last thing she was expecting was for him to go THROUGH her. He fell to his hands and knees, tears dropping from his eyes onto the terracotta tiles.

She reached out to comfort Joe but her hand went through his shoulder. Their mum scooped Joe up and he sobbed into her shoulder. 'She was here! I saw her! I did!' he cried.

There was a lengthy silence. Their father spoke first. 'You're tired Joey. I think you'd better have a nap. Mummy will tuck you in and read you a nice story and when you wake up, we'll have some apple pie with ice cream, OK?'

Joe wiped his nose on his sleeve. 'OK' he mumbled. His mother carried him out of the room. As soon as the door closed behind them, Elspeth saw her father's face crumple and tears spilled from his eyes. His shoulders shook with sobs. Elspeth had never seen her father cry before, not even when he broke his toe playing football.

Instinctively, she reached out to him - and froze. Her hand was translucent, bordering on transparent. She was fading away before her eyes. This was not good! What was happening? How could she stop it? She could feel panic rising in her chest and she gripped the edge of the kitchen table to steady herself and tried to focus. Her eyes rested on the newspaper lying open where her dad had left it. She smoothed out the page and read it, not bothering to move her hand as it was now completely transparent. The paper was open on the obituaries page. That was when Elspeth saw it, crammed amongst the now-departed ninety year olds. Her name.

How... how was this possible?! She tried to scream but no noise came out. She tried to cry but her tear ducts were out of use. All Elspeth could do was stand frozen, hunched over her own obituary as she vanished for the last time.

Cathy says:
WOW... eerie and beautifully written! Thanks for sharing, Blue! If YOU love to write, why not give a 'like' to the CC Facebook Fan Page and join in with the regular story challenges? And feel free to COMMENT BELOW to have your say!
at February 19, 2018