FIVE MINUTE FICTION: ON THE RISE

Reader Blue shares a beautiful, powerful short story that is guaranteed to get you thinking... 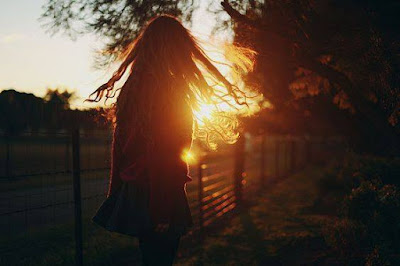 Sun walked briskly down the rocky riverside, head high, although he didn't feel confident at all. His bag weighed heavily on his shoulder, dragging him down as his namesake sank lower in the sky. He cursed himself for not choosing a better time for, despite his nocturnal nature, he did not relish the idea of being found in the dark. But he'd gone too far now. He knew he could turn back and go home, smile falsely at his mother and lie through gritted teeth. He'd been out for a walk. He'd been seeing friends. He'd been anywhere but here, doing anything but what he was about to do. He didn't want to though. He'd had enough of running scared. He'd had enough, full stop. This was it.

He'd reached the end of the line, so to speak, a dead end, both of the path and in life. He stopped and dropped his bag, kicking it lightly so it fell open. On his knees, Sun rummaged through the pockets of the bag with only the dying daylight to aid his search. However, it didn't take long for his fingers to close around the craft knife he knew was there. He slid the cover off and unzipped the main pocket of the bag, gawping at the rainbow of clothes within. A green T-shirt, a pair of red skinnies, a blue scarf. All his clothes but none of them felt right. He reached in and pulled out a pink halterneck top. The perfect place to start, he thought, and before he had even registered what he was doing, he was in a frenzy, slicing up the fabric with his craft knife until it was little more than tiny ribbons, some being caught on the wind and drifting away to who knows where. But he wasn't done yet. He pulled each item of clothing out of the bag in turn, smoothing it out before viciously attacking it, his face scrunched in contempt as he fought back tears. Boys don't cry, Sun told himself.

Before long, he was through, panting more with overwhelming emotion than with exertion. The rainbow was scattered around him, torn to shreds. He skipped stones on the river whilst he waited for his heart to stop pounding, admiring the ripples before each stone sank, dragged under by the current. When the red blotches clouding his vision faded and he was able to breathe again, he turned back to the craft knife. It was now or never. He rested the blade against his wrist, seeing his veins pulse under the skin like they knew what he had planned for them. He looked away, focusing on the fabric confetti nearby. He willed himself to press down. But he couldn't. The tiny sense of self preservation was fighting back with everything it had. Frustrated, he flung his hands down, his head back and screamed at the twilit sky. The trees shook and the undergrowth rustled as the birds left their nests and various small mammals headed back to safety, away from the strange human boy, screaming his head off. But he knew they'd see him as a strange human girl. That was the problem. That was always the problem. That was the reason he was out here at dusk, slicing up his clothes and attempting to slice up himself. Because he knew he was Sun but everyone else thought he was Sarah.

He hated that name. It was ostensibly feminine and there was no way around it. His mum loved the name, loved the little girl she thought she had. But whenever she bought him a new dress for a birthday party or tied his hair into plaits with pink ribbon or introduced him as "my daughter", Sun wanted to scream, to stamp his feet, to tell her that he wasn't her daughter, he was her son, her son, her son! It had become something of a mantra, always playing on a loop in his head, and that was how Sun came to call himself that. Despite his miserable demeanour, he thought it suited him. Even the sun had to hide behind the clouds sometimes, just as he hid behind his layers of clothing, his long hair. It didn't feel like his. On impulse, he grabbed a chunk of hair hanging in front of his face and, in one swift move, hacked through it with the craft knife still clutched in his clammy hand. He felt instantly lighter. Clutching at more hair, he repeated the action, again and again, hair slipping through his fingers and fluttering to the ground or getting caught on the wind and floating away. Good riddance.

Then he was done. He smiled as he ran his hand over his shorn head. It was terrible, he knew that. He was no barber. His new hairdo was uneven with strange tufts of hair here and there. He'd get it sorted by professionals tomorrow. There would be a tomorrow now, although he'd been certain that there wouldn't be, not so long ago. He picked up his bag - lighter now, just like him - and turned towards home. The sky was completely dark now, the sun swallowed up by the horizon, but he wasn't scared of the dark anymore. He'd been living in the dark for most of his life anyway. But although the sun may have set, Sun knew that he was just beginning to rise.

Cathy says:
Wow! A topic I feel isn't talked about enough, and a compelling, emotional read. Thank you, Blue. What did YOU think? Tell us below in the COMMENTS SECTION!
at March 25, 2018