Reader Roz looks at some of the traditions and superstitions surrounding Hallowe'en… yikes! 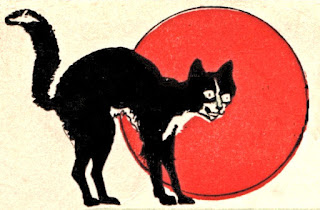 BLACK CATS:
A common decoration at Hallowe'en, black cats are often thought of as bringers of good luck, especially if one crosses your path… in the UK, anyway. Across the rest of the world, a black cat is often seen as BAD luck… black cats were associated with witches, which may be why.

SPIDERS:
Lots of people are scared of spiders, and they are a common decoration at Hallowe'en. Legend says that these tiny creatures were often the companions of witches in medieval times. Superstition says that if you see a spider on hallowe'en, it signifies that the ghost of a long-lost loved-one may be watching over you. 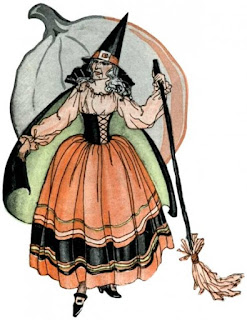 WITCHES:
Witches symbolise evil and danger, but in fact the stereotype of the elderly witch comes from the old pagan celtic religion which venerated the three stages of womanhood - the maiden, the mother and the crone (witch). The pagan celebration of Samhain is on November 1st, the day after Hallowe'en and the crone (witch) was traditionally respected on that day. She did not symbolise evil then, but the changing of the seasons. In the middle ages, solitary women who still clung to the old pagan religion were often feared and condemned as witches, and witchcraft and paganism evolved into symbols of fear and wickedness.

DUCKING FOR APPLES:
In the olden days, apples were seen as a sacred fruit and could be used to predict the future. An old custom on Hallowe'en was the tradition of 'bobbing' or ducking for apples. A barrel or bath was filled with water and several apples were set to float on it. People then took turns to try to pull an apple out using just their teeth (no hands) which usually results in lots of splashing! The first person to get an apple out of the barrel without using their hands is traditionally the first of the group to be married. 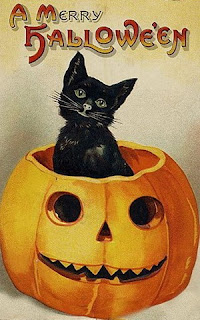 If someone gets their apple on the first attempt, they are destined for a true and lasting love. If it takes many attempts and lots of splashing, it will take a while before they meet the right partner. Lastly, if a girl sleeps with the apple she 'bobbed' under her pillow that night, she is rumoured to dream of her future love!

PUMPKIN LANTERN:
The pumpkin lantern or 'Jack o' lantern' is said to originate from an Irish myth. A drunken farmer, Jack, is said to have tried to trick the devil, but as a result was turned away from the gates of both heaven and hell and was left to wander the underworld carrying a turnip lantern lit by a burning coal from hell. The Irish believed that placing a jack o' lantern outside their houses would pacify lost souls on the night of Hallowe'en. The legend reached the USA when Irish settlers arrived in the 19th century, and pumpkins were substituted for turnips. Up until the 90s, turnips were still used in Ireland and the UK.

Cathy says:
Ooh… fascinating stuff! I remember when pumpkin lanterns were made of turnip… very few pumpkins in the UK back when I was a child! I also remember bobbing for apples every Hallowe'en… fun times! Are YOU superstitious? COMMENT BELOW to have your say!