BECCA: I MISS HAVING A BEST FRIEND...

It's problem page time on DREAMCATCHER again, and reader Becca has a friendship question for Honey Tanberry...

Becca says:
Last year I started high school with a group of girls I wasn't really friends with. In primary I had a close group of friends I always hung out with, and one of the girls was my best friend, but we drifted apart over the years. By the time I started high school, there was nobody from my primary going that I felt close to at all... I missed my old friends, and I am not the most confident person to begin with. Now I sit with a big group of girls. The more confident ones have made best friends already and formed smaller groups, but I don't really have anyone special. I'd love a best friend, but I don't know how. I remember how cool it was to have a best friend back in primary and I miss that. Also, I can't help thinking that if I can't even make girl friend, how will a guy ever like me? How can I make better friends? Do I need a best friend? 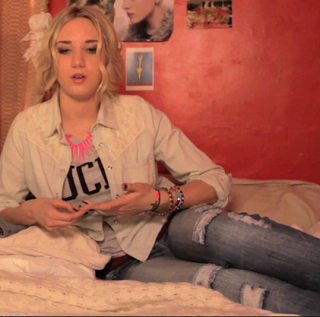 Honey says:
Like you, I had good friends in primary... but not so much after that. I always had plenty of friends, people to do things with, but it took me a while to suss that they weren't really good friends. I didn't make real friends until I met Tara and Bennie at school in Sydney, and I almost messed up with them because they weren't the kind of 'cool' kids I was used to hanging out with. So... you don't need a 'best' friend, but it's good to have close friends, yes. They don't happen by magic - give the kids you're at school with a chance. Suggest meeting up outside of school and gradually get to know them better - in time, you may grow closer to some of them. Join clubs, both in and out of school, and don't judge anyone as not being 'friend material'. Listen to other people, be open and interested in them... slowly, you will make connections. By the way, I've never had any problems getting to know boys... so why should you? They'll let you know if they like you, but take my advice and put friendship first, ahead of boys. That's a lesson I wish I'd learned a long time ago.

Cathy says:
Interesting advice from Honey - do YOU agree? COMMENT BELOW to have your say.
at March 02, 2016