Sophie Scholl was a German student who had the courage to speak out against Hitler and the Nazi regime - and paid a terrible price for her bravery. 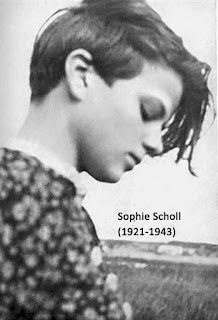 The White Rose movement was a resistance group active in Nazi Germany between 1942 and 1943. The group was small in order to maintain secrecy, and members were young students who attended Munich University - two of those members were Hans and Sophie Scholl, a brother and sister, who were determined to fight the Nazi regime as best they could. Hans and Sophie had been raised in a family which was critical of the Nazi regime, and Sophie held a firm christian faith which gave her the courage to oppose what was happening around her. The White Rose group made and distributed anti-Nazi and anti-war leaflets and painted anti-Nazi graffiti on walls, and in doing so they risked being charged with treason and put to death.

Sophie's boyfriend, Fritz Hartnagel, was a German soldier and had witnessed Russian prisoners of war being shot and buried in a mass grave; he had also heard about the mass killings of Jews and others taking place in concentration camps, and had discussed these things with Sophie and her brother. This pushed them to begin distributing leaflets against the Nazis asking German citizens to resist the regime. Sophie was a vital part of the operation because as a young girl it was felt that she may be less likely to be stopped and searched by the SS.

However, Nazi Germany was a police state and at war with much of Europe; they were enraged at the activities of the White Rose group; as Sophie and her brother Hans handed out copies of the sixth leaflet, they were seen by a Nazi party member and reported to the Gestapo. They were arrested, interrogated and put on trial for treason. When asked about her activities Sophie replied: 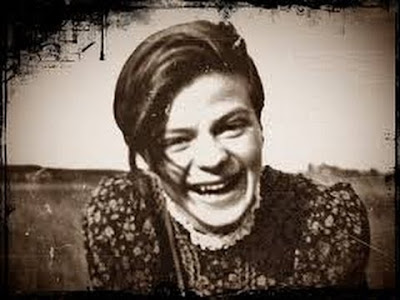 'Somebody, after all, had to make a start. What we wrote and said is also believed by many others. They just don't dare express themselves as we did.'

Sophie, her brother and their friend Christoph Probst were pronounced guilty of treason and sentenced to be put to death by guillotine. Sophie remained brave and courageous in spite of a broken leg incurred during her interrogation and her death sentence. Her final words on walking to the guillotine were these: 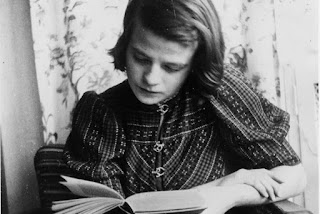 'Such a fine sunny day, and I have to go, but what does my death matter if through us, thousands of people are awakened and stirred to action?'

Cathy says:
Did you know about the life and death of Sophie Scholl? How far would YOU go to challenge injustice? COMMENT BELOW to have your say!
at March 25, 2016