AFTER A FASHION: THE ELIZABETHAN ERA

Our fashion and history expert Jess takes a look at the Elizabethan era... when fashion followed the lead of one very powerful woman, Queen Elizabeth 1st... 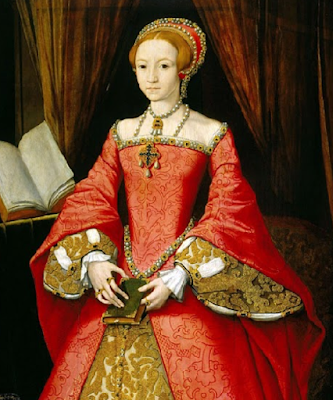 Jess says:
You can see from this early portrait of Elizabeth as a teenager in the early Tudor period just how much fashions changed once she became queen! The opulence and luxury of fashion for the wealthy stepped up to a whole new level... Elizabeth was a queen who liked to show her power and stature in the way she dressed. Compare this portrait of Elizabeth in 1546 to the portrait below, painted in the late 1500s and you will see how the style has changed. Instead of the hair neatly pulled back from the face, plaited and pinned up and hidden under a jewelled hood, in the second image the hair itself is the decoration, studded with pearls and jewels and feathers, with hairpieces added to pad the hair out. The hint of lace showing along the neckline in the first picture is, by the late 1500s, a huge and dramatic starched lace ruff. The draped pearl necklace in the first image is now six or seven long, heavy strands of pearls. The sleeves are now huge, padded and jewelled, and the over-sleeves have morphed into a cape. The neat nipped-in bodice is now a sharp triangle shape, the tiny waist hauled in with lots of tight lacing, a distorted and dramatic shape. As for the skirt, gone is the triangle shape in favour of a wide padded underskirt and a dark overskirt, both heavy with embroidery and studded with jewels. The viewer is left in no doubt that this is a queen who really does have the world at her fingertips. 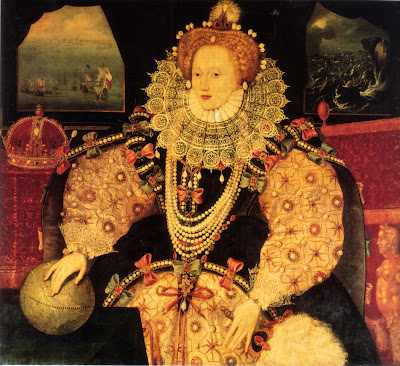 Although only the queen could go to such extremes with this fashion, all women copied the style. Cage-like contraptions were strapped on beneath the skirts to support the new, wider shape and ruffs and lace cuffs were the order of the day. The queen's hair was red, and suddenly red hair was fashionable; women used dye made of saffron, celandine, cumin seed and oil to achieve a red-blonde colour. Urine was another substance used as a bleach. As Elizabeth's hair faded and thinned (due to the frizzed effect she favoured, achieved with the use of hot irons) the queen began to use wigs and hair pieces to achieve the look she wanted. She is said to have owned more than eighty wigs. Elizabeth also used make up to perfect her pale complexion. A snow white skin was valued as beautiful because it signified wealth and privilege; ordinary women were expected to work outside and so became tanned. In those days, a tan was the opposite of cool. Some women went to great lengths to achieve the pale look, including allowing themselves to be 'bled' by leeches. Worse still was the popularity of a make up called 'ceruse', made from white lead and vinegar, which was highly poisonous. Mixtures made of sulphur, alum or tin ash were also used, and also very dangerous. Red lips and cheeks were achieved with the help of cochineal dye, made from crushed beetles. Belladonna (another poison) was used to make eyes look large and bright. All these dangerous materials caused more trouble than they solved, and when skin lesions, blemishes and wrinkles appeared honey, lemon juice or rosewater might be used to soothe the skin... or highly dangerous mercury might be used.

Although the Elizabethan era was a great one for England, and important because it was the first time England had been ruled by a woman alone for any length of time. Elizabeth was highly educated and cultured, but although she wielded the power all of her advisors were men and women in Britain still had little or no freedom. Women were not seen as equal to men and their lives were bound by child bearing. The average Elizabethan woman gave birth to a child every two years, but families were not always large as many children died in childbirth or from sickness or disease in early childhood. In spite of the amazing dresses, I don't think I would have liked to be a young woman in this era. For one thing, I would have been tempted to try out these early forms of make up and would have probably done myself a lot of harm in the process. I think I'm very grateful for modern cosmetics... and thankful to the pioneers of the Elizabethan era for pushing back the beauty boundaries!

Would you like to know more about Queen Elizabeth 1st? Would you like to see more of the lush clothes and gowns? Two DVDs are well worth a watch... ELIZABETH and its sequel, ELIZABETH: THE GOLDEN YEARS. Although they tweak history a little bit, they tell the amazing story of one of England's strongest and most iconic monarchs... and how cool that she just happened to be a woman!

Cathy says:
Is anyone else as hooked on Jess's series as I am? I can't wait to see what comes next. I knew a little about Elizabethan make up but urine as hair bleach? White lead as foundation? Nooo!!! What lengths would YOU have gone to in the name of fashion? COMMENT BELOW to have your say!
at September 16, 2016