Back to school means new uniforms, new styles and looks... and those all-important new school shoes. What are your school shoes like? 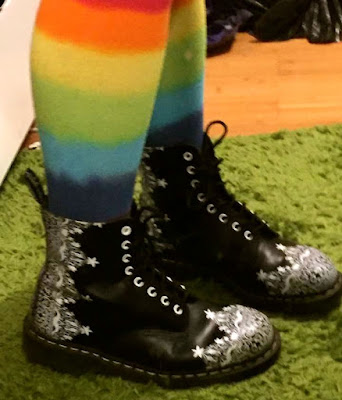 Hollie says:
I used to have a pair of school patent brogues that became widely known amongst my friends as 'the lesbian tap dancing shoes'. They had a wooden type sole and so I had many painful accidents when I tried to walk on the shiny floor in our new sports hall! On the bright side, I soon got hardened to my peers (including some sneaky Sixth formers) laughing at me! I think I carried off the look well, though. I have been out of school for a little while but I am planning on going to college at some point in the fairly near future, and when I do (eeek!) these will deffo be the shoes I wear... college doesn't have uniform rules, so I might even get away with the rainbow tights... ;o) 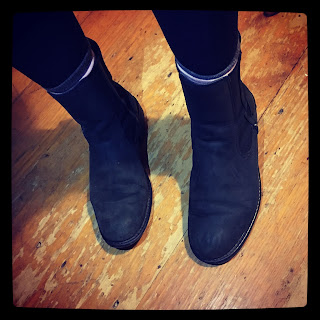 Jodie says:
My school shoes are flat black boots... I've actually been wearing them in the holidays too, with bare legs, except on the hottest days when I gave in and wore sandals. But I love the boots-and-bare-legs look, and now it's getting cooler I'm teaming leggings with the boots. They are very soft and comfy and they were cheap too, as they are not real leather. Although they are not brand new for school, I don't care because I love them, and I have a feeling I will be wearing them until they fall apart. I'm in Year Ten now and they are not too strict on footwear, which is good, as I am sick of the usual school shoe stuff! 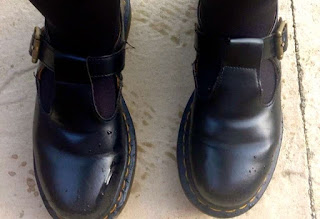 Charlotte says:
Oh, I love my school shoes! They are Doc Martens - only because they are the only pair of shoes I haven't managed to break! Well, I broke the buckle on one pair during drama, but this pair are fine! Plus, they are super comfy. I know three other people with the same shoes as me, but I pull them off the best! They're great, and I admit i wear them outside of school as well. They are not exactly delicate shoes, and once or twice I have tripped over in them, but then I am just super clumsy. Not the fault of the shoes!

Katie says:
My school shoes are from JERSEY... which is significant because I actually live in New Zealand, and we bought them when we were on holiday there. I was born in Jersey, so that is another cool connection! They are Clarks brand and have velcro fastening and hearts on the soles, which is great, and they are very shiny and businesslike, but actually they are really boring compared to my other shoes. That's the trouble with school shoes, isn't it? They're not really allowed to be exciting. Although... heart-embellished footprints... ;o)

Cathy says:
All of these shoes are much, much cooler than the horrible black lace-ups I had to wear at secondary school. It wasn't that the uniform rules were super-strict, more that they were cheap and hardwearing, and my mum needed them to last all year. **Sobs.** Are YOUR school shoes cool? Which of these four pairs would YOU pick? COMMENT BELOW to have your say!
at September 24, 2016