AFTER A FASHION: TUDOR TIMES

Reader Jess continues our series on the history of fashion with a sneaky peek at Tudor times... will YOU take a few style tips from Tudor beauty Anne Boleyn? 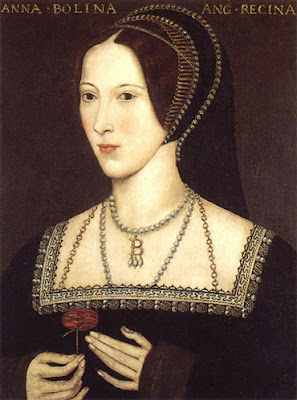 Jess says:
Imagine you are at the court of Henry VIII, the newest lady in waiting for Henry's new wife, Anne Boleyn... helping her to dress each day. Anne Boleyn, right, was the Tudor courtier who won the king's love, causing him to get rid of his first wife against the wishes of the church and declare himself as head of the newly created Church of England. What was so special about Anne? She was clever, and had spent time in France where she had picked up French fashions and manners. So... as lady in waiting, you would get Anne up and help her to wash, change her night shift and dress her in a day shift/chemise and then a coloured petticoat or under dress which was often starched or stiffened to make it stand out, or even padded. Next the over skirt would be put on, and then the corset-like top part of the dress, which would have had some boning to enhance the wearer's shape. Sleeves and under-sleeves were separate and were laced onto the dress, and then stockings, shoes, hood and jewellery would be added. 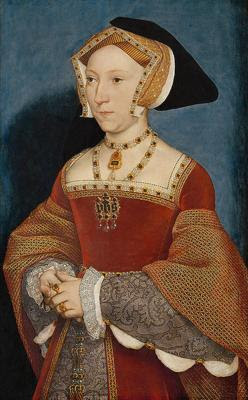 The skirt shape was triangular, often divided at the front with a triangle of the under-dress or petticoat, in a contrasting colour, a part of the design. The bodice of the gown was tight, an effect achieved by lacing, and the neckline was wide and square, showing much more skin than had been permitted a century earlier. The edges of the chemise were sometimes visible along the neckline, just as lace-trimmed frilled cuffs were often visible beneath the sleeves. Tudor sleeves were wide and fancy, becoming more ornate as time went on, with split sleeves that showed puffs of the under chemise and draped and hanging over-sleeves, as in the portrait of Jane Seymour, left. Jane was Henry VIII's third queen, once he had tired of Anne Boleyn and sent her to her death. While Anne had introduced the 'French hood', as seen in her portrait at the top of the page, Jane Seymour made the earlier 'gable hood' fashionable again. Although Jane Seymour kept the king's favour, her reign was short, as she died soon after giving birth to a son in 1537. 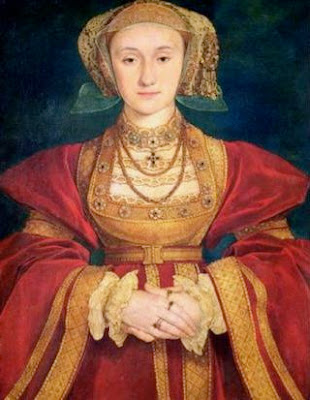 Henry's next queen, Anne of Cleves, shown right, brought a different style to the court... her elaborate hood and high waisted gown were typical of the German court, for Anne was a princess from Europe. Henry was not happy with his new wife and had the marriage annulled. By this point he was very overweight, ageing and unwell, and his bulk shows clearly in the men's style of the day which favoured a very square outline with padded doublets, jackets and breeches. In spite of his failing looks and health, Henry VIII had two further queens, Katherine Howard, a girl of only sixteen who did not keep the king's favour and was beheaded; and Catherine Parr, who outlived him. So... I am not sure I would have liked being a lady in waiting at the court of King Henry VIII after all. Far too many beheadings, too much intrigue and quite a bit of danger for any young woman. I do like the clothes, though!

To get a sense of what the costumes may have looked like, try watching the DVD THE OTHER BOLEYN GIRL about Anne Boleyn and her sister, or LADY JANE about the 'nine days queen' Jane Grey who reigned briefly after the death of Henry's son, Edward VI. WOLF HALL also looks at the reign of Henry VIII and the rise and fall of Anne Boleyn and Jane Seymour. All three films show some gorgeous costumes.

Cathy says:
I am loving this DREAMCATCHER series... like Jess, I love history and the Tudor period is full of intrigue - and awesome fashions! Would YOU have risked it as a courtier at the court of King Henry? COMMENT BELOW to have your say!
at September 08, 2016