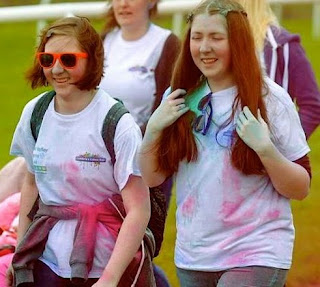 Emily says:
Earlier in May I took part in the Cumbria Colour Run which was held at Carlisle Racecourse. My sister and I signed up for it together to raise money for an amazing charity, the Eden valley Hospice. The hospice cares for many people who are terminally ill, from children through to the elderly, throughout Cumbria. The work they do definitely deserves recognition and support, so we decided they would be our chosen charity. 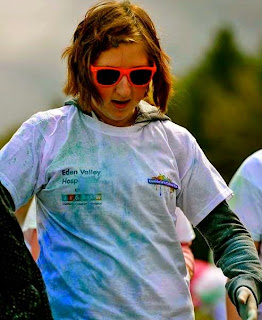 We arrived at the racecourse on the day and had to queue for about half an hour to register for the run. That queue was so long! We finally registered and were each given a white t-shirt (pristine, but not for long!), a pair of sunglasses and a race number. We headed outside, lost in a sea of white t-shirts and colourful sunglasses. We began with a Zumba style warm up… it was fun, but quite difficult with so many people! After the warm up, we were taken to the racecourse to start the Colour Run - and we were away! There was a huge difference between the runners… some were running, some walking, some had pushchairs… and we were all ages, shapes and sizes! 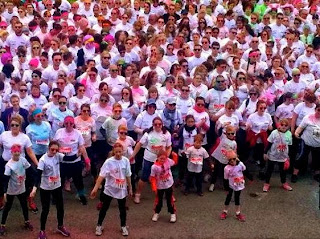 The run was five kilometres or three miles, which was two laps of the racecourse. I was pretty sure we could do that… but of course, this was no ordinary race! At various intervals, there were stations set up where volunteers had to throw bucketfuls of different coloured powder paint at us. The aim was to get as colourful as possible!

It was an amazing day, and I would really recommend taking part in a similar event if you ever get the opportunity. It was so much fun! All in all, a fantastic experience, and a great way to raise money for a very good cause.

Cathy says:
Wow… that's definitely a new twist on a 5k run! It sounds lots of fun… well done Emily! Have YOU ever done anything to raise money for a favourite charity? COMMENT BELOW to tell us what!
at May 28, 2015