In another of our occasional series on famous young women from history, we look at Grace Darling, the lighthouse keeper's daughter whose heroism made her famous in the 19th century… 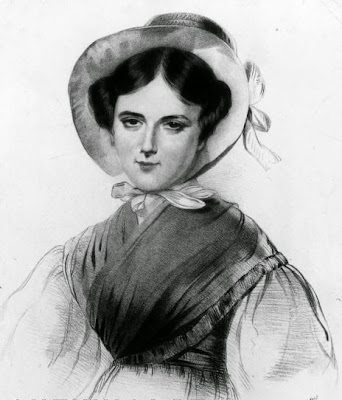 Grace Darling was born in 1815 in Bamburgh, Northumberland, the seventh of nine children. Her father ran the lighthouse on Brownsman Island, one of the Farne Islands, and at just a few weeks old Grace was taken to live there, in the small cottage attached to the lighthouse. In 1826, the family moved to the newly constructed lighthouse on Longstone Island. They lived mostly in a large room on the ground floor of the lighthouse, warmed by a wood stove, with bedrooms above and the light at the very top.

In the early hours of September 1838, when she was twenty-two years old, Grace looked from her bedroom window near the top of the lighthouse and saw a ship, the paddle steamer Forfarshire, wrecked and sinking on a nearby rocky island. The weather seemed too rough for the lifeboat to make the journey from the mainland, so Grace and her father took a rowing boat slowly out to the wreck, approaching it from the lee side. They rescued four men and one surviving woman who had lost her two young children in the disaster. They rowed back to the lighthouse and Grace stayed to look after the survivors while her father and some of the rescued men rowed back out to save four more shipwreck survivors. Out of 62 passengers aboard the Forfarshire, only another nine had managed to escape, rescued by a passing sloop in the night. The lifeboat from the mainland, when it finally arrived,  found only bodies; the weather was by this point so bad that the lifeboat and its crew were forced to remain at the lighthouse for three days. 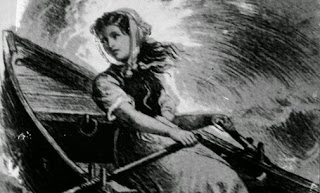 When news of Grace's part in the rescue became known, her bravery made her the nation's hero. Donations totalling £700 were raised for her, including £50 from Queen Victoria. Portrait painters came to the island to paint her picture and hundreds of gifts, letters and proposals of marriage flooded in for her. Grace's story had a sad and untimely ending. Just a few years later, she fell ill during a trip to the mainland and died soon after of tuberculosis, aged just twenty-six. Poets such as Wordsworth and Swinburne immortalised her story, novelists fictionalised her life and painters turned her heroic rescue into art. The girl who spotted a shipwreck and helped to save people from the wreckage became the nation's hero, and her story is still told today.

Cathy says:
I learned the story of Grace Darling as a child at school, and her bravery has stayed with me over the years. Did YOU know the story of her heroic rescue? Do you think YOU could be as brave in the same situation? COMMENT BELOW to have your say!
at May 21, 2015