We asked readers to tell us about their favourite childhood toys... and what happened to them! 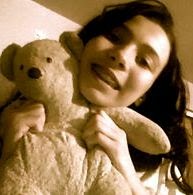 Marjolaine says:
I have a big plastic box of teddies I had when I was little. I got Harry when I was five - he'll be a decade old at Christmas and he's full of stitches because he's been through so many 'operations' to keep his arm, head and legs from being amputated! He used to have a little brown jacket but it shrank in the wash and got lost somewhere along the way. I got him at an ice rink in France from my grandad's sister and I skated around the rink all day holding my mum's arm on one side and hanging onto Harry and the barrier with the other. He used to play Jingle Bells but I played it so many times it ran out! I still have Harry... of course I do!

Blue says:
As a child I had a purple teddy with my starsign on; also a collection of Doctor Who figures. One of the Doctors has charcoal on his face because I wouldn't let go of him during an art lesson at school; also, his foot is glued on after I made him abseil over the bannister - the string wasn't strong enough to hold K-9, a cyberman, Rose and two doctors! Currently I have a skelanimal, Kit, and a grey tabby toy with no name... 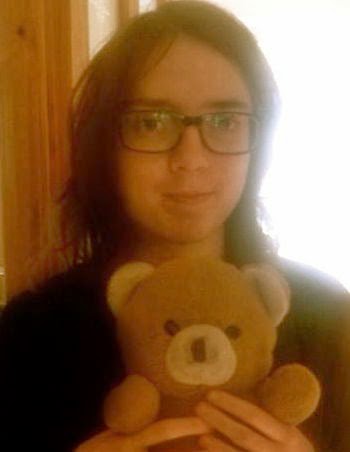 Laura says:
My teddy Cookie means a lot to me... my sister gave him to me when I was tiny. He sat on my bed for many, many years - in some sense he's my protector, and always has been. I went through some tough and scary times when I was younger but Cookie was always there with a hug; even now, if he's somewhere else, things don't feel right. I used to have tea parties and play games of Monopoly with him... OK, I used to cheat a bit! Even though I've had him so long, he isn't worn. Cookie is a connection to my sister who is now away at uni; because she gave him to me, he's extra special.

Charlotte says:
This is my teddy, named 'Teddy' (I know, very creative...) and I have had him since I was born. I took him to school on my first day of primary and I took him in again on the very last day. He'e travelled a lot, too - he has been to France, Spain, Germany, Scotland, London and much more! There is a picture of me with him when I was a baby and he's bigger than me... I hope I always have him, he's like a part of me!

Stephanie says:
I have a toy rabbit from Winnie The Pooh... he's two and a half feet tall, and when I first got him he was lots bigger than me! I think I was about eighteen months when I first got him and I used to feed him spaghetti - no sure why, but I was convinced he'd like it! As a result he's kind of orange around the mouth... oh dear!

Emily says:
I had loads of Polly Pocket dolls that I used to play with a lot! My sister and I had a whole case of little clothes and shoes for them, and some really cool things like a ferris wheel, a disco and so on. We used to fill up the washing up bowl with water to make a swimming pool for them! I also collected tiny animal ornaments, and when I left home to go to uni I brought some of my favourites with me to keep me company... they have great memories attached to them!

Do YOU have a favourite childhood toy that meant the world to you? COMMENT BELOW to tell us all about them, or to comment on this feature!