LAUREN: THE VIEW FROM THE ORCHESTRA PIT... 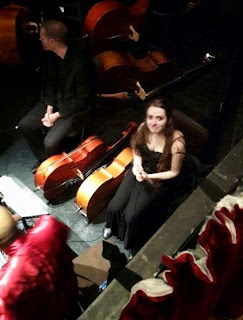 Earlier this year, I had the amazing opportunity to take part in a theatre production called Full Moon. It was a fusion of ballet and African dancing, with music composed especially for it; that's where I came in! I was with the National Youth Orchestra down in the pit, just to the front of the stage. I was made Principal Cellist, which was all pretty nerve wracking. No pressure, then! We each had a microphone - I was very impressed with the fact that each one was made specifically for each instrument: I took a photo of mine, and there it is, clipped onto my strings so everyone in the theatre could hear what I was playing. It was the first time I'd been part of a professional production, and I really loved it! 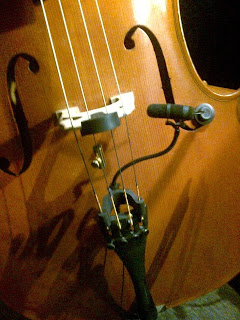 It was a totally new experience to work with dancers… often we would have to speed up or hold back the tempo according to the speed of their movements, and we had to play so many things that weren't even in the music in order to fill in any gaps! It was a run of fourteen shows, and I really enjoyed the routine of it all. During the interval, we'd go to the restaurant in the foyer for drinks, then all of us (including the conductor) would rush back when the bell went! Of course, having a bunch of teenagers and young adults in a pit brings problems of its own. There was a full-on love triangle and other romantic entanglements, resentment between some musicians… and on the second last night of the show we had to call in the standby conductor because the usual conductor's wife had gone into labour!

The funny thing is that we orchestra players never actually got to watch the show, since we were so busy the whole time providing the music. Except for one guy, whose double bass string snapped halfway through a performance, so he was allowed to go see; he reported that the costumes, special effects (especially the giant swinging pendulum) and overall spectacle were amazing. I thoroughly enjoyed being a part of the production and I met some wonderful people there; I sorely missed it when it was all over.

Cathy says:
I love Lauren's insight into life in the orchestra pit… a love triangle? Who knew! Have YOU ever taken part in a big show? COMMENT BELOW to have your say!