Chinese New Year begins on Saturday 28th Jan and lasts for two weeks... we look at what 2017, the year of the Rooster, might mean for you... and how it is celebrated! 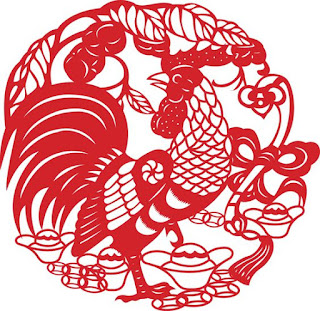 2017 is a Fire Rooster Year - combining the symbol of the rooster with the element of fire. This combination only occurs every 60 years. If you were born in 1993 or 2005, you are a Rooster according to Chinese astrology. If you were born in a Rooster year, it pays to take extra care in 2017! Roosters are generally active, fun and extravert, sometimes attention seeking or coming to life in the spotlight. Often, Roosters are very health conscious and sporty, though they can also be sensitive to stress. Roosters make loyal and devoted friends.

The year of the Rooster should have a more calculated and practical mood than 2016... as long as world leaders keep their fiery emotions in check! Whatever happens, the year will see powerful developments in the world at large. On a more personal level, the Year of the Rooster can bring new opportunities for each of us, helping us to solve longstanding problems and dilemmas.

How do the Chinese celebrate their New Year? In the run up to the 28th, the home is cleaned and shopping is done in preparation for the holiday. Decorations such as red lanterns and banners are put up and families enjoy special meals and give special red envelopes containing money to children. Families traditionally stay up late on New Year's Eve, to 'keep watch over the year'. It is believed that what is done on Chines New Year's Day can affect luck for the whole year, so an effort is made to make it as positive as possible. Fireworks and firecrackers are part of the drama, though some big Chinese cities like Beijing and Shanghai have banned them as too noisy and dangerous. Elsewhere, the use of firecrackers is still going strong! Lion and dragon dances may be watched on New Year's Day, and British cities such as London, Manchester, Liverpool and others with a big Chinese population, stage these entertainments too. Traditionally, people put on new clothes and greetings are given. In China, it is customary to offer gifts to the ancestors. On the 15th day of the festival, lanterns are released into the sky, or set adrift on rivers, lakes or the sea, and New Year Celebrations close.

Enjoy Chinese New Year, whether you are a Rooster or not!

Cathy says:
Do YOU know YOUR Chinese zodiac sign? COMMENT BELOW to tell us more!
at January 27, 2017