MARTI: WHY I LOVE SIXTIES FASHION!

Reader Marti explains why she likes the fashion of the sixties so much... and why that era changed things for everyone and turned the fashion world upside-down! 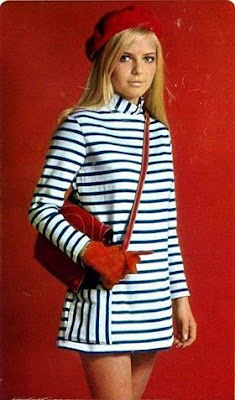 Marti says:
What I love most about the 1960s is how different this period is to any other that had gone before. Skirts were shortened, colours intensified and fashion boundaries were broken. The teenager was born and young women no longer had to dress like younger versions of their mothers. Fashion broke so many rules and came up with so many innovations in the sixties - the now so-popular bikini came into fashion in 1963 and the miniskirt, symbolic of the decade, is still a timeless fashion piece today.

There was so much diversity in what people wore, too! Fashion mirrored the social movements of the time - the early sixties were relatively conservative with styles reminiscent of the late fifties, such as classic prints and knee-length dresses, whereas by the late sixties things had changed beyond all recognition. 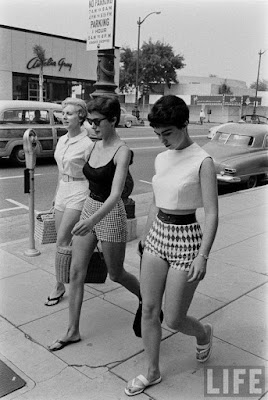 It's no surprise that the sixties was a decade of great change in other ways, too - this was the decade when man first walked on the moon, when women gained more equality and when British pop sensations such as the Beatles and the Rolling Stones took the world by storm.

Fashion was not about to be left behind. Skirt lengths became ever shorter and men wore tunics and capes and began to grow their hair longer! Many of these styles seemed to come from the streets - suddenly fashion was for everyone, and not just the rich elite who could afford designer clothes. Young designers such as Mary Quant opened shops selling the things young people wanted to wear - youth was leading the way in fashion for the first time ever. Unsurprisingly, it wasn't long before London stole Paris' position as the centre of the fashion world! 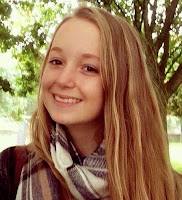 I think my favourite era of the decade is probably the mid point, around 1964-1966. Fashion was at the point where people were choosing how they wanted to dress, and prints were bright but not yet overly busy. Culottes, box-shaped PVC dresses and even paper clothes were popular. This rebellious and energetic vibe is one that inspires me and one I try to carry over into my own fashion choices - only with my own flair, of course! (Wait... aren't flares 1970s?!!! Haha!)


Cathy says:
I remember sixties fashions well - although I was only a small child, there was a real buzz in the air and I vividly remember my aunties in mini dresses, PVC boots and towering beehive hairdos! Do YOU take your fashion inspirations from a particular decade? COMMENT BELOW to tell us more!
at January 21, 2017