PADDY - NOT QUITE PADDINGTON!

Today is the birthday of Michael Bond, author of the famous series of books about the fictional Paddington Bear. Writer and blogger Malcolm looks back at what that character meant to him... 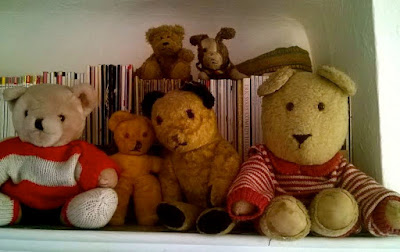 Malcolm says:
Meet Paddy (right) and his friends, including Martin, a dog named Doug, Squeaker (named on account of a squeezy insert later removed in a life-saving operation) and Laurence. Paddy came into my life forty years ago last Christmas. Something of a consolation prize at the time, he quickly became the bear I treasured most. All these years on, he is still loved, sitting with his companions in a high shelf in the bedroom of our family home in Lancashire. 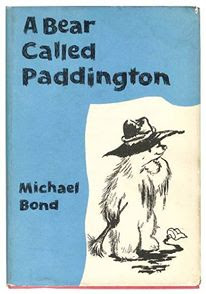 A consolation prize? I'd best explain! Most summers from 1973 onwards, Mum and Dad would take us to St Ives, Cornwall, a place I loved. For as long as I could remember on those first holidays, there was a Paddington Bear in a shop window on the walk to town from the railway station, and every summer I looked longingly in but understood that he was out of our price range. Dad was a postman and Mum did every job under the sun - mostly cleaning - to help pay the rent on our council house outside Guildford. We were grateful that they managed to save enough to take us for that annual holiday. Besides, the price tag on that Paddington Bear, with his toggle-loop duffle coat, rubber wellies, felt hat and luggage label, seemed to increase every year. 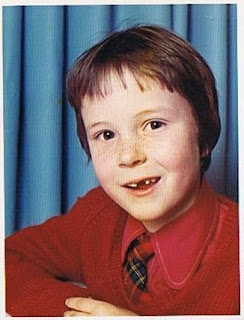 I was hooked on the BBC children's TV cartoon of Paddington, first aired in 1975, having already started reading Michael Bond's stories about this stowaway bear from Darkest Peru. I didn't own many books then (most were borrowed from the library) but Paddington Bear was up there with AA Milne's Winnie The Pooh for me, and I had read them all before I turned ten in 1977. What's more, I still have my copies, some more dog-eared than others.

I don't remember being disappointed that I never got to own a proper Paddington. I got the best possible alternative. I've no idea how Mum found the bear that became known as Paddy, as it's too late to ask her now, but he arrived on Christmas Day 1976, sporting a hand-made red felt coat with buttons, black felt boots and hat. These days he wears a jumper Mum originally knitted for one of her nine grandchildren, the clothes he arrived in long since gone. After all, he had travelled thousands of miles to reach Darkest Surrey. And yes, Paddy turned out to be the perfect Christmas present!

Cathy says:
Awww this is such a lovely story! My little brother also had a 'fake' Paddington bear... they must have been quite the thing around 1976! Who was/is YOUR fave fictional character? COMMENT BELOW to tell us more! (And Happy Birthday, Michael Bond - and thank you for the stories!)
at January 14, 2017