We asked you to share your stories of animal antics at Christmas... this is what you said! 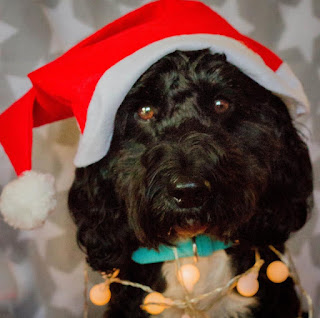 Hollie says:
This is our dog Boris... he had to be bribed with significant portions of turkey and cranberry biscuits to sit for this photo! Boris is spoiled at Christmas, more than anyone in the family. Don't tell him, but this year he has already been bought a sock monkey, an activity mat and some treats to go in it. And he's already had an antler chew! They've all been wrapped as we've discovered wrapping paper is the one thing he'll put in his mouth but not swallow! He's already torn an angel off the tree and eaten a few pine needles but we wouldn't have him any other way! (Apart from possibly sitting on all my homemade prezzies and crushing them!)

Katy says:
Well, there was the year our dog Scooby ate two selection boxes from under the tree! He looked so guilty, but I knew he'd probably do it again given half a chance! Chocolate is supposed to be poisonous to dogs but Scooby was fine, thankfully. Needless to say, we always leave chocolate prezzies on a high shelf now! 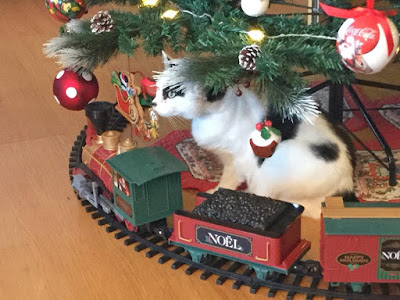 Bev says:
Severus, or Sevvie for short, really loves the run up to Christmas - there's always lots to play with in the apartment, as you can see in the picture to the right! He's like a mischievous toddler really, always looking for trouble, and the tree gives him he perfect place to lie in wait for any unsuspecting human passing by, ready to pounce out and nip their toes. He has his own stocking on Christmas morning, full of new toys and treats, and is allowed two sachets of his favourite soupy cat food instead of the usual one. Sevvie is very much a pampered pet but so darn cute and easy to love!

Holly says:
We have a great pic of our cat Lister from about seven years ago, venturing out into the snow. Lister's black... he ended up looking like a reverse Dalmation, all speckled with snowflakes! 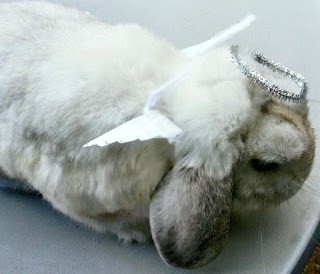 Michelle says:
The pic on the left shows my three year old lop rabbit Silver... I made him some white wings and a sparkly halo so he can be an angel for Christmas. The wings and halo are just made from pipe cleaners and paper, and rested gently on him... how adorable does he look?

Jan says:
I am SO not impressed with our cat Lucifer this year. THREE times he has knocked the Christmas tree down! We've had to start keeping him out of the room. He thinks it's one big adventure game specially for him, with every bauble a cat toy! 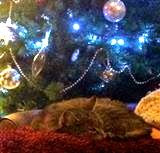 Saffy says:
On the right is a pic of my lovely old cat snuggled up under the Christmas tree... she's not with us any more, sadly, she passed away last year, but I love this pic. Christmas won't be the same without her!

Sonia says:
This is a bit gross, I warn you! We had a real Christmas tree for the first time last year. It looked really pretty but after a while the room started smelling a but funky - and not in a pine-needles kind of way. Then one day my dad caught our dog Pie actually using the tree as a toilet! Urghhh! We had to get rid of it. This year we have a fake tree placed on a high table, and Pie is not allowed to be alone in the room with it!

Cathy says:
Aww, great pictures and fab stories! Do YOU have any stories of animal antics this Christmas? COMMENT BELOW to have your say!
at December 16, 2017