It's problem page time again on DREAMCATCHER, and this week reader Tayla has a problem for COCO TANBERRY to solve...

Tayla says:
I am eleven years old and I want to be a vegetarian, but my mum says I am too young and can't make decisions like that until I'm at secondary school. I hate that she doesn't take me seriously. Most of the time we compromise, I eat Quorn stuff along with whatever everyone else is having, or sometimes fish. However, we will have twelve extra people over for Christmas Dinner and mum says there is no way she is doing a vegetarian option as she'll be run off her feet, and I have to eat turkey like everyone else. I think she is trying to force me to eat it because I know my uncle thinks being veggie is stupid and he'll make a fuss if he knows I am not eating meat. I care about animals and I do not want to eat turkey. What shall I do? 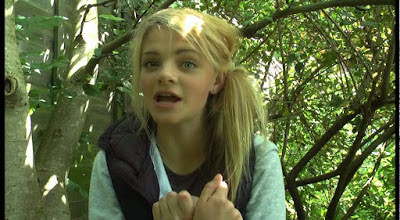 Coco says:
Hmmm... I think that eleven is old enough to know your own mind, but then I would say that! Well done for moving towards a veggie way of eating, though! Christmas can be stressful, especially with twelve extra guests for dinner and a relative who likes spouting off about vegetarians. Talk to your mum and plan and make your dinner in advance - there are lots of ready-made veggie options that work really well and won't put your mum to any trouble. Next, make sure you're seated at the opposite end of the table to your uncle... he might not notice you're not eating meat! If he does, just say you're veggie at the moment and refuse to be wound up if he tries to make a big deal of it. Let your mum know you'll help her any way you can, but that you just can't eat meat... hopefully she'll understand. If she insists on serving you turkey, just eat the rest, leave the turkey.. and fill up on Christmas pud!

Cathy says:
I had several failed attempts at going veggie before I managed it properly, aged fourteen. My mum was convinced I'd fade away without it! I think Coco's advice is good, but do YOU agree with her suggestions? COMMENT BELOW to have your say!
at December 12, 2017