BETTY: THEY CALLED US BOBBYSOXERS...

Another in our fab series of growing up in a different decade… Betty tells all on being a teenager in the 1940s! 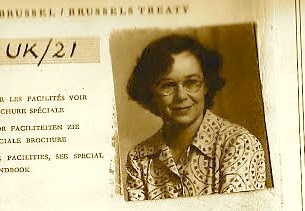 Betty says:
We were called 'bobbysoxers' by the American soldiers or GIs. Newport, the nearest town to the village in South Wales where I was an evacuee, was over-run with them, all seeming so relaxed, chewing gum and leaning against shop windows. We evacuees were received with mixed feelings by the Welsh residents of Caerleon - although we made friends with the Welsh children, they couldn't resist making fun of our south-east accents, calling us Cockney even though we were from Dover. Our lessons as an evacuated school were timetabled in scattered venues in the village: Baptist Chapel, Infants school, Training College, Church Hall. In spite of rationing, the uniform had to obey strict rules and even the 6th formers had to wear the hideous hat with its red band, the tunic and blouse, stockings (there were no tights then!) and regulation black shoes. My saturday attire was a skirt, blouse and jersey, or, in summer, a cotton dress. No jeans, no trousers! 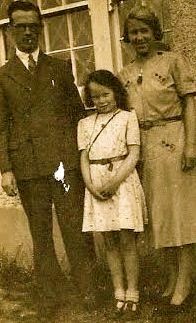 Our spare time, when homework was finished, was spent at the Lido or the Youth Club where we danced the Paris Glide or the Quickstep. We went for long walks and played tennis. I was given a bike which lacked a bell or any chromium trimmings, as it was the wartime 'utility' version. I was a girl guide and on our return to Dover I became a Ranger, with a grey jersey and beret as uniform. We tentatively experimented with make-up, lipstick and (daringly!) mascara, which came in a box which you had to moisten with saliva (spit, in other words!) No make-up of any kind was allowed in school.

Our heroes were the stars of Hollywood musicals - we went to 'the pictures' nearly every Saturday. On the wireless (nobody called it the radio back then) we listened to dance bands like Geraldo, Jack Payne and the American Glenn Miller. An exciting development was being linked as pen-pals to four French girls in Orleans, a French town much battered in the war, just as Dover had been. We eventually went over to visit and meet our pen-pals… what a thrill to go to newly liberated France and speak French! Our life back then was certainly severe and restricted by today's standards, but we were perhaps content with our simpler lifestyle!

Cathy says:
Wow… I love this account of growing up in wartime Wales and post-war Dover… brilliant! It sounds amazing to me, and I'd love to time-travel back to see it all. How about YOU? Would you have liked being a teen during wartime? COMMENT BELOW to have your say!
at April 17, 2015