Another in our fab series about growing up in a different decade… we talk to Barbara, who was a teenager in the 1970s! 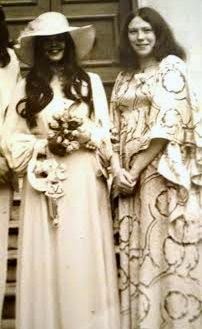 Barbara says:
I hit thirteen in 1969 so my teens spanned the end of the hippie era into the glam rock/disco era of the 70s, and the clothes I wore reflected this. There were maxi coats (including an old army greatcoat picked up second hand) to mini skirts; bell-bottom jeans and t shirts bought from Biba in Kensington High Street; and platform shoes! Huge, dangerous-to-walk-in platforms picked up at the local market. I was the eldest of four and my dad was strict. I wasn't allowed out on a school night and on Friday and Saturday my curfew was midnight. If I was late I was grounded the next week, so I spent many Saturday nights running home (platform shoes in hand) to make sure I was home before the clock chimed 12. This curfew stayed in place until I left home at nineteen.

My hair was red, long and very thick and styling it took hours; there were few hair products then so I had to blow dry it section by section - if I didn't, it would be a frizzy mess. I'd style it before I went out and my mother would fuss as she thought that if it wasn't completely dry I'd catch a cold. I lived in Fulham which was not the trendy upmarket place it is now, and went to school halfway across London near White City. I'd leave at 6.45am and catch two buses and two underground trains! 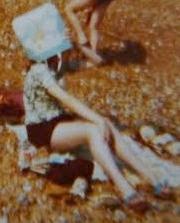 Despite their strict rules, my parents didn't worry about me wandering around London so I had the freedom to do as I pleased at weekends and holidays… and this was way before mobile phones, so no-one could check up on where I was. My friends and I loved to explore London and walk along Fulham Road, Sloane Avenue and King's Road, maybe stopping for coffee at a Wimpy's! My best friend at school and I travelled home together, chatting non-stop. The minute I got indoors I'd ring her on the house phone and carry on the conversation - this would drive my dad mad as he could never figure out what we could talk about for so long. It was exactly what teenagers talk about today.. make-up, friends, boys, music, clothes! We are still great friends today…

Cathy says:
This really brings alive 1970s London… cool! These days, Barbara is a librarian and a brilliant campaigner for libraries… how awesome? Would YOU have enjoyed being a teen in the 1970s? COMMENT BELOW to tell us why - or why not!
at April 30, 2015